The vigor, physiological age and health of seed tubers determine the number of tubers a potato plant will produce, in addition to the tuber weight and production potential. It is important to consider that the seed tubers feed the new plant until its root system is well developed. Recently harvested tubers must undergo a dormant period or physiological rest in order for bud break to occur. Prematurely harvested potatoes tend to have longer rest periods than those harvested at full maturity. Physiologically younger seed tubers generally present an accentuated apical dominance, which results in a lower number of bud breaks and stems. 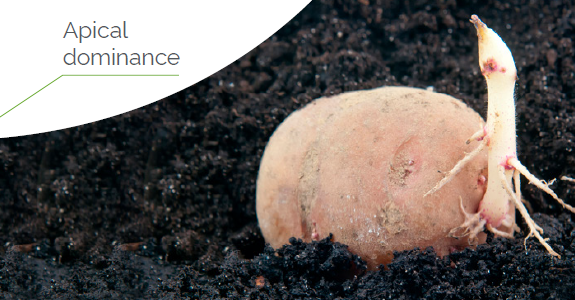 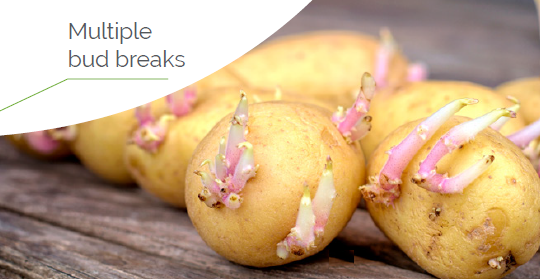 Crop uniformity is determined by the homogeneity of emergence and the subsequent development of the plant (Kramm, 2017). Therefore, high productivity is directly related to a shorter period from planting to emergence, which helps to rapidly initiate the photosynthetic process. Thus, factors such as adequate physiological age of the seed tuber, pre-bud break, superficial planting and adequate soil temperature (over 10°C) accelerate this process (Contreras, 2002). Temperature directly influences emergence and root development. After emergence, the roots and shoots of the plant are simultaneously developed. 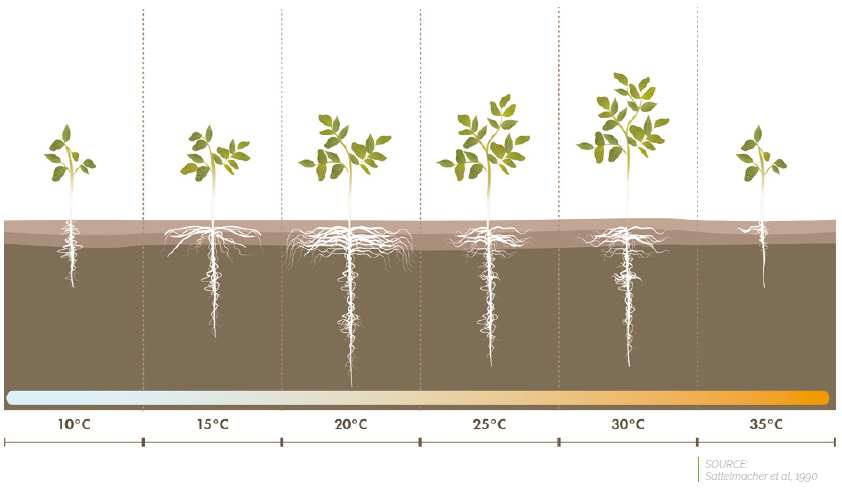 It is very important to select the optimal nitrogen source to be utilized on potato crops, especially at suboptimal temperature conditions (lower than 15° C and higher than 25° C). The majority of nitrogen absorbed by potato plants, 70 to 90 percent, is in the form of nitrate (Van Beusichem et al., 1988).

In this form, nitrogen is transported to the leaves where it is reduced to NH3. The NH3 is immediately detoxified and combined with sugars produced during photosynthesis in order to generate an amino acid -glutamine- (Marschner, 1995). When nitrogen is absorbed in the form of ammonium (NH4), it is completely metabolized in the roots. The carbohydrates transported to the roots via the phloem are necessary for root development. This means that part of the carbohydrates, targeted to fuel root growth, now have to be used for the ammonium metabolism, which leaves less carbohydrates available for root growth. (Marschner, 1995).

Additionally, under stressful conditions, such as high or low temperatures, drought and salinity in the root zone, the plant’s respiratory rate increases, which results in lower carbohydrates availability for the NH4 metabolism. This could cause pH reduction and even toxicity by NH3 (Kafkafi et al, 2012).