Although the application of foliar KNO3 has been shown to increase the number of squares, it was uncertain whether this effect was due to the K+ or the NO3-. Therefore a study was conducted in the USA to evaluate the influence of different foliar-applied salts on square development of two cotton varieties that differ in maturity and root morphology. Plants were transferred to a K-free nutrient solution 21 days after planting and one of the following salts, KNO3, K2SO4 or NH4NO3 was foliar applied at an equivalent rate of 11,2 kg/ha KNO3. Control plants were applied with an equivalent volume of water without nutrients. The experiment was conducted in a randomized complete block design with three replications. The foliar treatment of KNO3 increased the number of squares by 31% compared to the control, 29% compared to K2SO4 and 49% compared to NH4NO3 (Figure 1). This finding suggests that K+, not NO3-is responsible for the improved square development with foliar-applied KNO3. Application of KNO3 several days before square development resulted in increased square number if K is limiting. Potassium nitrate outperformed other salts in foliar application where a response to K is desired.

Figure 1. Effect of foliar treatments on square formation in cotton. Means followed by the same letter are not significantly different at P=0,05 using protected LSD. 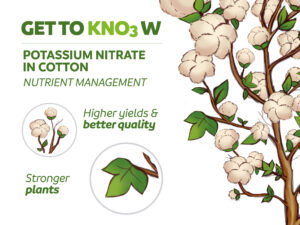 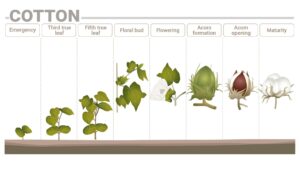 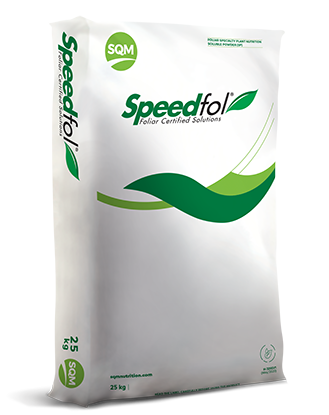