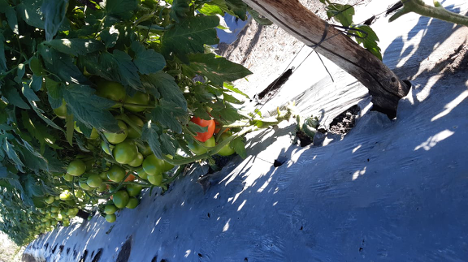 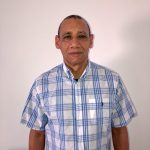 At the beginning of March 2020 I visited Huerta Cuatro Milpas, dedicated to growing tomatoes in Ocozoncautla, Chiapas.  The producer had asked for our support to correct some nutritional problems in his farm.

When going through the field, we noticed an excessive growth of the plant in its first phase due to the indiscriminate use of ammoniacal nitrogen in the base fertilization (18-46-0 y 12-11-18 mixed), plus additional applications of organic matter.

The water used for irrigation contained high levels of sodium and chloride.  Electric conductivities (EC) were between 2.5 and 3 dSm-1, with in-soil measurements of 2.4-2.5 dSm-1, which could result in a lower than expected yield.

We reviewed in detail what the producer had done.  In the case of excess nitrogen, we recommended increasing the levels of potassium in order to stop the growth, turning the plant to a more generative state.  As it was in the 45 days stage and with low temperatures in the area, this would help give the plant resistance.

It was not possible to apply Agricultural Gypsum to the soil to address salinity as the crop was already established.  We recommended injecting nitrates in concentrations between 5 and 10 Mmol, in order to reach nitrogen concentrations of 70 – 140 gr N m3, and of calcium between 5-10 Mmol (200-400 gr of Ca m3).

By using Ultrasol SOP, Ultrasol MKP, Ultrasol NKS and Calcinit, a balance was achieved in the plant, allowing us to work with acceptable ECs.  The harvest started at day 65, to the producer’s great satisfaction.

A lesson learned from this case, applicable to other areas and countries with a similar problem, is that the injection of potassium nitrate and calcium into the solution can reduce the plant’s absorption of Na and Cl.  This reduction was observed in the foliar analysis carried out later by the producer.  Lastly, in this stage we can work with an EC of 1.7-2.1 and obtain good results in tomatoes grown in soil.