Salinization is recognized as the main threat to environmental resources and human health in many countries, and is a serious environmental factor limiting the productivity of crops around the world. Even though soluble salts are inherent in all soils (salinity), build-up of salts in a given soil layer above a certain level- (salinization) adversely affects crop production. Some agronomic practices such as fertilizer and pesticide application are among the leading causes of soil salinization.

How can you prevent or mitigate soil salinization?

Fertilize with potassium nitrate (KNO3). The K+ and NO3- are fully absorbed by the plant following crop demand, no nutrients are left behind. With a dominant presence of N as nitrate (NO3-) in the soil it stimulates K uptake and in turn K stimulates NO3- uptake. This is a very synergistic effect that can also benefit the uptake of other nutrients. Other sources of N, such as ammonium can have the opposite effect.

Since salts move with the wetting front, they accumulate in specific profiles according to the irrigation regimen and the type of irrigation used. For instance, when irrigating using sprinklers, water and salts move deeper, according to the soil's infiltration capacity and the water quantity, until they stop at a certain depth. When using drip irrigation, there is also a lateral movement of water and salts.

Using potassium nitrate prevents these buildups and can help reduce the need for over watering to flush accumulated salts out of the soil.

Fertigation can reduce soil salinization and mitigate the effects of salt stress effects because it improves the efficiency of fertilizer use and increases nutrient availability. In arid regions, nitric acid and sulfuric acid fertigation represent rapid ways to reduce or minimize salinity and sodicity.

Nitric acid applied with fertigation reduces soil pH and increases Ca2+ dissolution in clay soils, thereby minimizing salinity injury due to Ca2+ / Na+ competition. It may also reduce chloride salinity in the root zone, because the nitrate can counterbalance the excess of chloride. 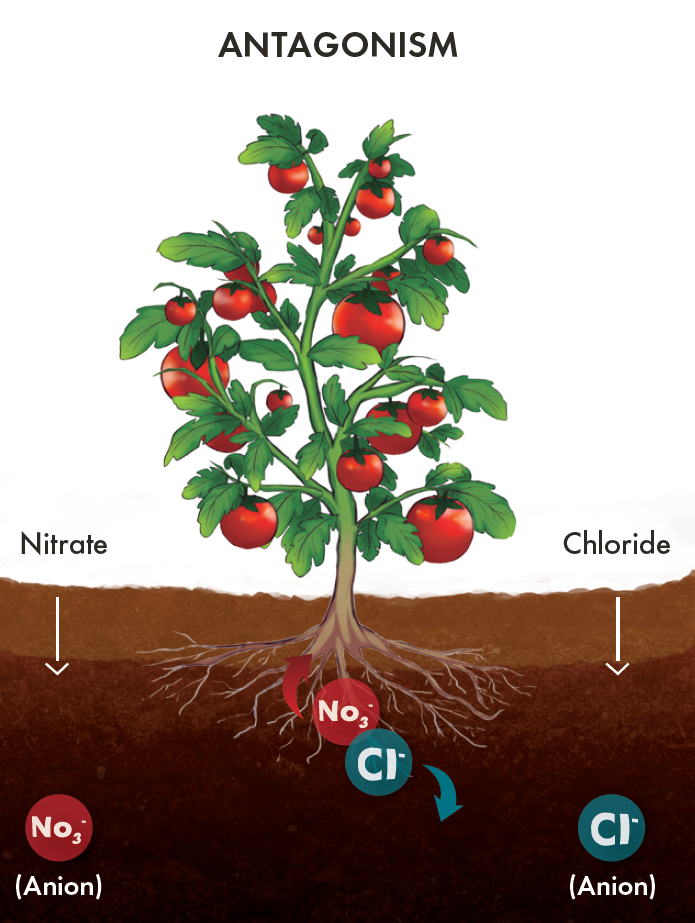 When choosing a K source, proper nutrient balance should be considered. Sulfur is a critical nutrient, however, if 100% of the K is supplied by potassium sulfate, the level of sulfur applied far exceeds plant demand and most is left behind in the rooting zone. Potassium sulfate should be applied, for example, to reach the required sulfur demand of the crop. That’s it. The balance of the K requirement should come from a source such as potassium nitrate, that will also supply a portion of the crops required nitrogen demand.

By replacing some of the potassium sulfate (K2SO4) and potassium chloride (KCI) we can avoid excess sulfate and chloride accumulation in the soil, thereby, reducing soil salinity. In the case of potassium thiosulfate, using potassium nitrate as a K source can avoid potential toxicity by using too much thiosulfate.

We must also understand the salt index (SI) of a fertilizer, to see additional benefits of using potassium nitrate as a main source of nitrate N and potassium. There are two common methods to determine the SI. The old method was based on tables developed from soil solution osmotic pressure (Rader et al 1943). These can be misleading and do not reflect the correct measurement of the salt index of a fertilizer. The second and more widely accepted method comes from electrical conductance – Jackson (1958); Murray & Clapp (2004) or the EC of a fertilizer.

When other K-fertilizers are compared with the Electrical Conductivity method, then potassium nitrate has the lowest salt index, partial salt index and EC-level. As seen below, potassium nitrate appeared to have a higher salt index using the old method. Using the new Jackson & Murray method shows more accurate readings. 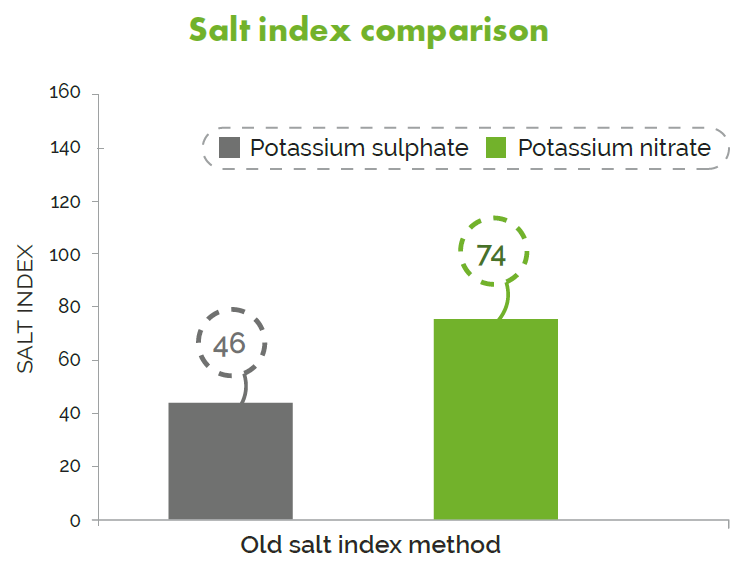 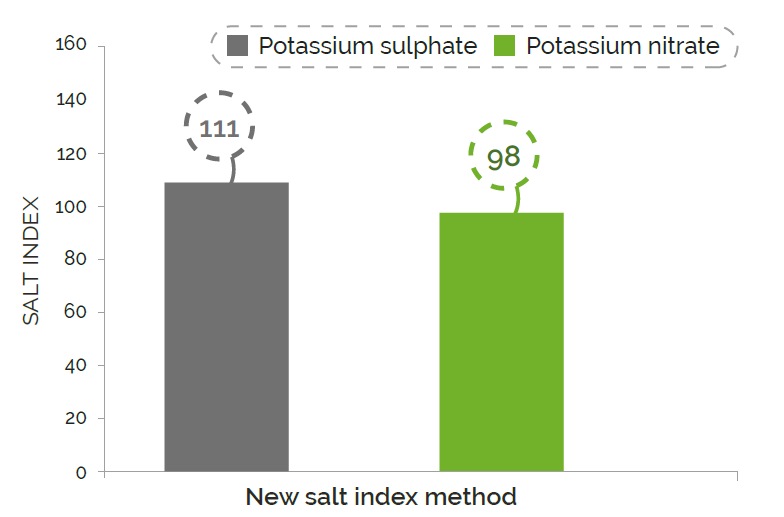 Listed are the references for both methods: