The nitrogen source (NH4+ -N or NO3- -N) can influence plant quality. For most plants, the use of NH4+ as dominant source in the nutrient solution can lead to impaired growth or be toxic. Simultaneous addition of NO3-  to medium containing NH4+ can alleviate potential toxicity of NH4+. The optimum ratio of NO3- :NH4+  is less than one. Plants exposed to high NH4+ concentrations will accumulate compounds such as sugars, or N-containing osmolytes such as proline or polyamines, to become more tolerant to ammonium induced damage. Stress tolerance in plants is found to be linked to the conversion of free-polyamines to bound- or conjugated-polyamines. Free-polyamines become conjugated-polyamines when they are connected to other low molecular mass organic compounds, e.g. organic acids and bound-polyamines when covalently linked to high molecular mass molecules, e.g. nucleic acids or membrane proteins.

In an experiment on vegetable soybean (Glycine max cv. “Li-xiang 95-1”) in Nanjing, China, the effect of NO3- :NH4+ratio on plant development and polyamine accumulation was investigated. The objective of this experiment was to elucidate the effects of nitrogen forms on polyamine levels, and their possible role in plant growth and development of the seeds.

Plants were grown in a 1:1 mixture of peat:vermiculite in pots in a greenhouse under natural light, with a nitrification inhibitor (dicyandiamide) added to the substrate. In a randomized design with three replicates, each pot with three plants was irrigated every three days with 1 L of nutrient solution (pH 6,5-6,8, EC 2,6-2,8 dS/m) containing different nitrogen forms, supplied as Ca(NO3)2, KNO3, NH4H2PO4 or NH4Cl.  Total N content of the nutrient solution was kept stable at 16 mM and 4 NO3- :NH4+ ratios were investigated (Table 1). To obtain identical K, Ca, Mg and total N and P rates, changes in the NO3- :NH4+ ratios were balanced by varying the Cl- concentration provided as KCl, CaCl2 or NH4Cl. At physiological maturity, the plants were harvested and a number of growth parameters were assessed. The accumulation of polyamines in time was determined in fresh seeds, harvested every 3 days during the seed developing stage till harvest, for three polyamines in free, conjugated and bound form: (putrescine (Put), spermidine (Spd), spermine (Spm)).

The ratio of both nitrogen forms had statistically significant effects on plant growth, pod development and seed weight (Table 1). Plants performed best in the treatments where at least 50% of the nitrogen was supplied as NO3-, and treatments with 75% NO3- consistently improved the plant growth parameters more than 50% NO3- . In contrast, plants given 75% NH4+ remained smaller, attained the lowest shoot, root and seed weight and the lowest number and ratio of pods and flowers per plant.

In general, the content of free-polyamines in seeds decreased gradually during the growth period, whereas  the content of bound- and conjugated-polyamines increased in time. Until 21 days after flowering, no difference was observed between plants given the different nutrient solutions. At the end of the seed development phase (24-30 days after flowering) the lowest level of free-polyamines Put and Spd was found in plants given 100% NO3-  or  75% NH4+  and these also showed the highest level of bound- or conjugated-polyamines. The highest levels Spm were measured in plants given 100% NO3-  or  75% NH4+, for all forms of Spm. The authors speculate that the bound- and conjugated-polyamines might be involved in the protection of the plant cells from stress induced by an imbalance in the NO3- :NH4+  ratio, with polyamines acting as nitrogen reservoirs and free radial scavengers, and maintaining the integrity of membranes, nucleic acids and proteins.

Table 1. The effect of four different NO3- :NH4+  ratios in the nutrient solution on the development of vegetable soybean. Means (± SD) followed by the same letter are not significantly different at p<0,05 (Duncan’s). DW=Dry Weight. 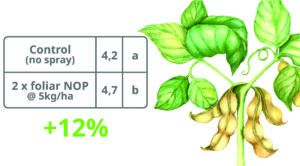 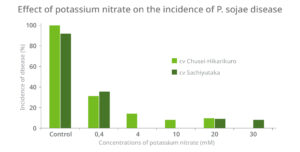