Salinity is alleviated by application of potassium nitrate in sweet corn

The effect of salinity and KNO3 levels in sweet corn (Zea mays cv Jubilee) was investigated in two experiments. The experiments were carried out in an unheated greenhouse in Bet Dagan, Israel, using an aero-hydroponic system. This system consisted of a 130-L covered container for the nutrient solution, a pump for its circulation, and boxes in which plants were grown. The roots were continuously sprayed with the nutrient solution. In each experiment, 15 treatments were tested: three KNO3 levels (2, 7 and 13 mM in autumn and 2, 8 and 14 mM in spring), and five salinity levels (EC of 2, 5, 7, 10 and 12 dS/m).

Fresh ear yield at any KNO3 level decreased linearly as the EC (dS/m) was elevated beyond a certain threshold value. In spring the interaction between EC and KNO3 was significant, resulting in a stronger reduction in yield due to increase in EC as KNO3 increased from 2 to 8 to 14 mM. In both experiments, increasing KNO3 concentration from 2 to 14 mM increased dry matter production and ear yield, while increasing salinity reduced them. According to the researchers this result indicated that at appropriate KNO3 nutrition the detrimental effect of salinity on ear yield is delayed. 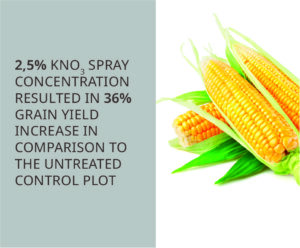