Rice is one of the most important foods in the Ecuadorian diet. Half of the rice production in Ecuador covers local demand, and what is not consumed locally, is exported mainly to Colombia. A smaller part - 20% of total export - is shipped to Italy, USA, and Spain.

According to data from the Ecuadorian Institute of Statistics and Censuses, the area sown with rice in 2020 was 370 406 hectares, with a production of 1 440 865 MT, representing a country average yield of 3.9 MT/ha. Most is produced in only two states in the mid-west of Ecuador: Guayas and Los Ríos. In the north of these areas the crop yields as much as 5 MT/ha.

There still is some rice production in the southern province of El Oro, but this area has been in decline considerably over the years. Before 2016 on average 3400 ha of rice were cultivated, this area is now reduced to around 1000 ha. A relatively low average yield (3 MT/ha) is achieved by growers in this province. This is explained by an inappropriate management of soils, resulting in acidified and saline soils, adding to the considerable phytosanitary problems in this area. 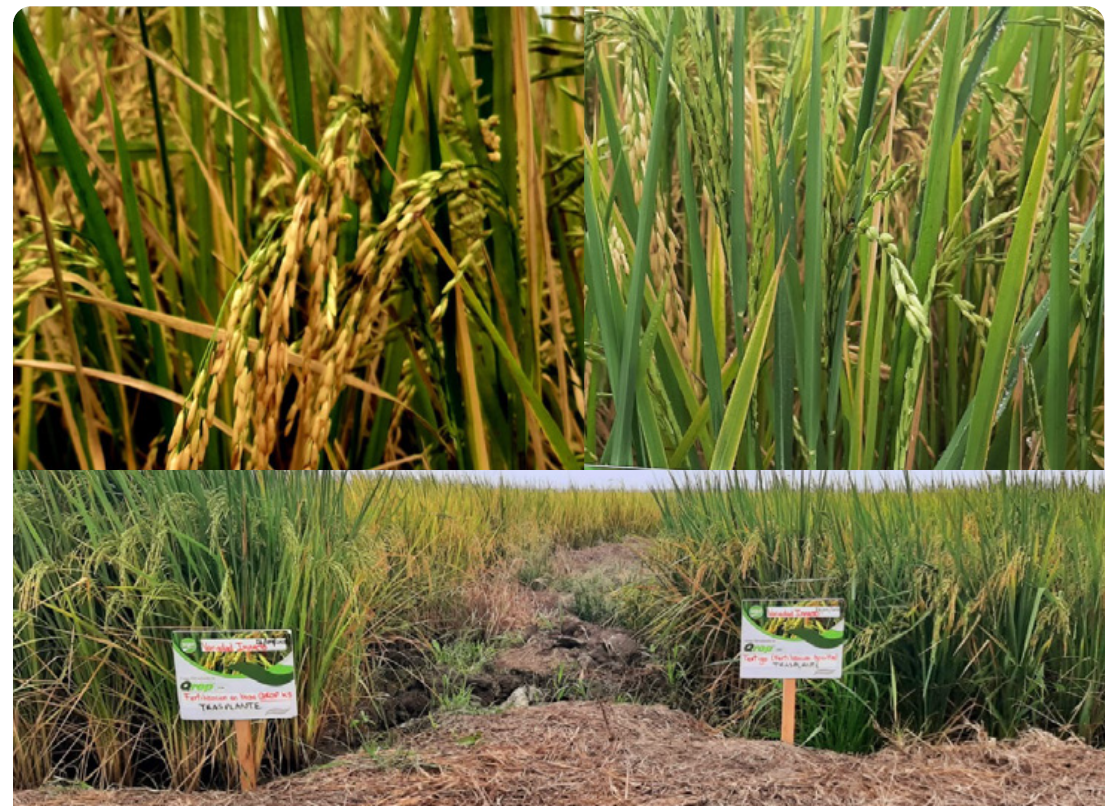 Figure 1. Transplanted rice in Ecuador. On the left the rice fertilized with Qrop® mix Rice formulas is more yellow, indicating earlier ripening compared to the traditional fertilized control on the right.

By application of a nutritional program with three formulas of Qrop® mix, developed by Paúl Duran (SQM Ecuador) and Felipe Garziera (SQM International N.V.), yield increases of 14% and 16% were obtained in two different planting systems at El Oro province of Ecuador, compared to the standard application of DAP, MOP and urea. The SQM program resulted in better nitrogen use efficiency from application of a higher proportion of N-NO3 in the total N, and application of more potassium while reducing the total amount of chloride.

By application of a nutritional program with three formulas of Qrop® mix, developed by SQM Ecuador, yield increases of 14% and 16% were obtained in two different planting systems of rice. 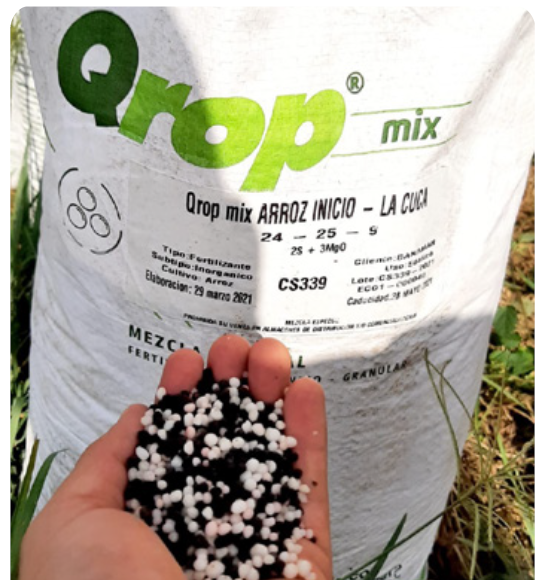 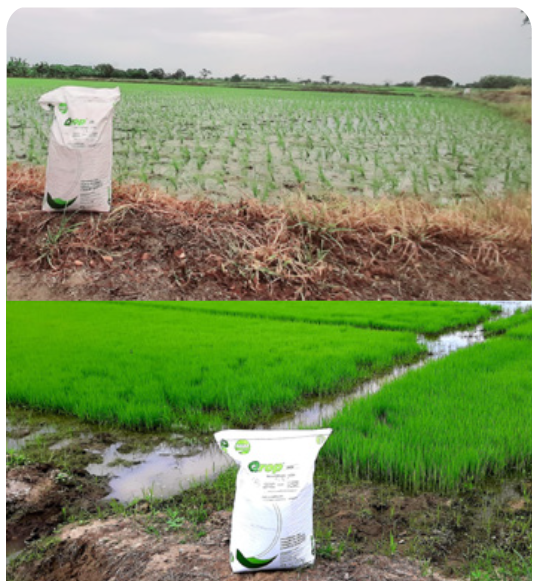 Figure 3. Prepared to apply the first application on the transplanted field (top) and the broadcast-seeded (“al voleo”) crop (week 5 after transplant or sowing).

The farmer witnessed two additional benefits of application of a higher proportion of N-NO3 and a higher K2O:N ratio with each application of Qrop® mix. First, he could harvest the fields fertilized with Qrop® mix 10 days earlier. Additionally, the high-quality sources of N and K in Qrop® mix Rice contributed to an improvement of crop health. The farmer gained a second harvest from regrowth of plants (so called “Soca”) in the Qrop® mix fertilized fields, in contrast to the control field where the typical local nutritional program was applied. Here the farmer had to plow and seed again to harvest a second rice crop, because of the poor condition of the “Soca”.

Qrop® mix Rice helped to improve crop health under the high pest and disease pressure in the area, by making it easy for the grower to apply the right amount of the right source of fertilizers, at the right time. This explains the increased crop yields compared to local farmer practice, where high amounts of urea and potassium chloride are used.

The farmers opportunity to have a second harvest, starting from “Soca” instead of having to prepare the land and sow or transplant again, represents a cost saving of 300 USD/ha, and additionally brings a benefit of earlier harvest from Soca compared to a directly sown crop.

Rice production is declining in the province of El Oro, Ecuador. The onset of the decline coincided with invasion of the panicle rice mite, or white mite, Steneotarsonemus spinki Smiley. This mite – and the rice diseases it is associated with - has rapidly spread since the damage reported in Ecuador in 2012. This is due to infested seeds from imported high yielding cultivars sensitive to the mite’s damage. Balanced fertilization can help control this damage. For instance, care should be taken on what form of nitrogen is applied, since excessive use of urea aggravates the devastation of the crop by the pest attack.

The aim of development of the Qrop® mix Rice formulas was to improve rice yields, by applying the adequate nutrition according to the need for nutrients in each crop stage. This was realized by the use of nutritional sources with a low salinity index, by replacing part of the amide-nitrogen (N-NH2) provided with urea with nitric nitrogen (N-NO3) from potassium nitrate, by reducing the amount of chloride applied and by providing potassium in each phenological stage.

Improved crop growth and crop health resulted in +14% (“al voleo”) and +16% (transplanted) increased yields in both the fields where Qrop® mix Rice was applied, compared to the farm standard treatment (Table 2). The higher investment on the SQM program, would be returned at 3.5 extra harvested bags/ha at a price of 24 USD/ha/bag of 45.5 kg/bag, and the extra yield was 2.5-3 times that number of bags, in both planting systems. An additional net profitability of 180 USD/ha was achieved in the transplanted crop and 132 USD/ha in broadcast-seeded (“al voleo”) crop.

Moreover, 23% less nitrogen was applied per ha. Added to the increase of yield in the SQM program, this resulted in 32-34% lower nitrogen used per MT of rice harvested. This trial shows the excellence of SQM’s agronomists. SQM’s solutions are designed to bring benefit for the grower, they aim to solve problems by improvement of yield under challenging conditions, and by careful selection of the right fertilizer sources, can help farmers reach higher yields with a lower environmental footprint.

The local standard program used by the farmers, applied in three moments of the crop development, was compared to application of a similar amount of nutrients at the same moments, in a SQM program comprised of three Qrop® mix formulas (Table 1). For each treatment, rice fields of 1 ha each were fertilized and harvested separately.

Application of the Qrop® mix formulas made it possible to reduce the total N applied – to 77% of the farmers practice (23% less N applied) – by replacing part of the nitrogen applied with urea, with N-NO3 from potassium nitrate.

Table 1. Fertilizer program in the local farm practice and in the Qrop® mix fields. This schedule was the same for both transplanted rice and direct sown (al voleo) rice. Application timing is given in weeks after either transplant or sowing. 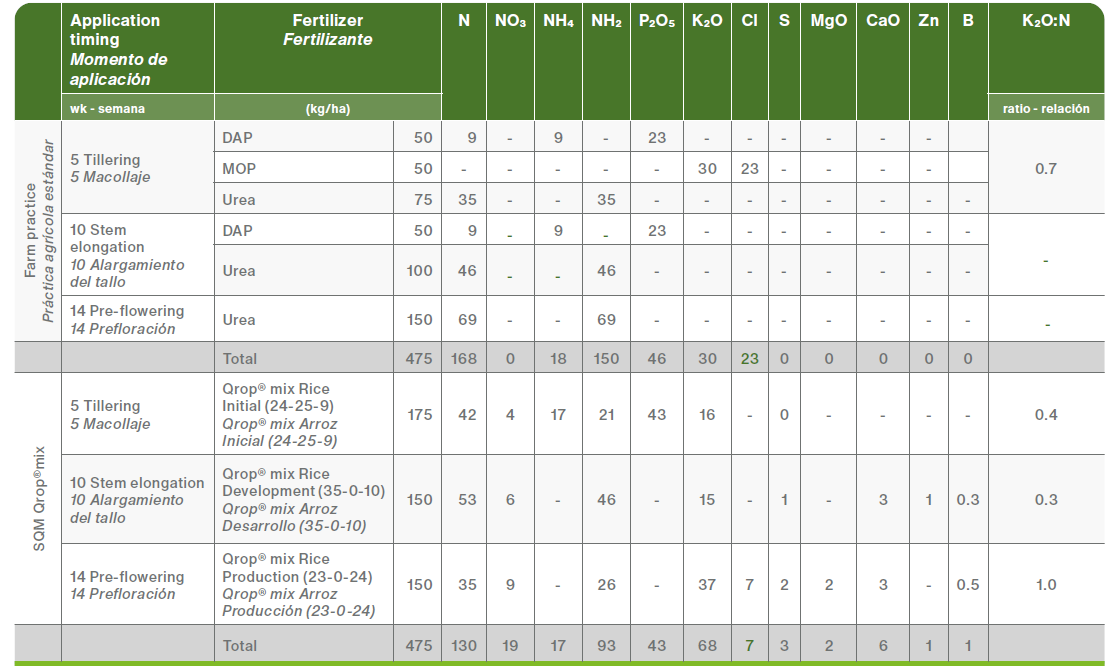 Additionally, the potassium fertilization was doubled, and potassium was provided in each application moment, with the highest K2O:N ratio in the generative stages to support grain filling. Partial replacement of the traditional MOP by prilled potassium nitrate in the Qrop® mix formulas, also reduced the amount of chloride applied in SQM treatment.

The SQM program was tested in two different planting systems, both of which are practiced in the province of El Oro. The first is “al voleo”, an extensive way of establishment of the crop, by broadcast seeding of pre-germinated seeds, on a flooded paddy field. The second planting system is transplanted rice, where seedlings are transplanted on non-flooded fields, enabling pre-planting weed-control. 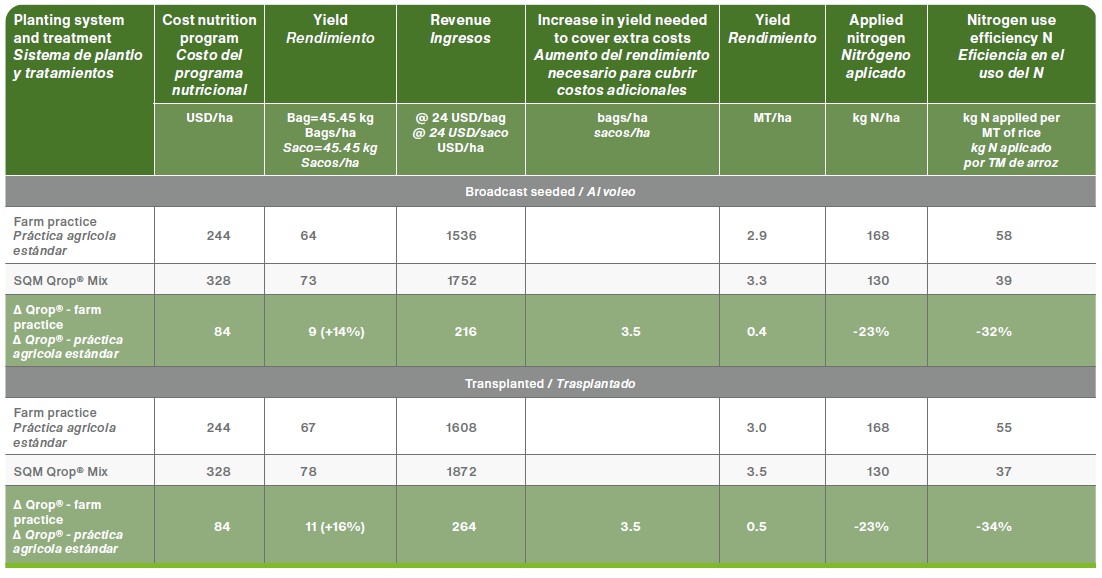