Onion is the world famous spice commodity used for flavouring dishes. Onion is also the agro-industrial ingredient for spices based on dehydrated powder and flakes. In India it is one of the most important commercial vegetable crops grown on an area of 1,2 million hectares with an average productivity of 16 MT/ha. Onion is a cool season crop, and preferentially harvested before the real hot season begins.

For the whole of India it is grown throughout the year, but the farmers will choose in each region the best time to grow. As general practice, it is grown under flood irrigation.

Use of potassium chloride (MOP) is subsidized by the Indian government, and the resulting low price is the main factor in the choice of MOP as K-source by farmers.

Onion was selected as a target crop for demonstration trials to persuade farmers that initial investment in higher priced potassium nitrate as optimal K-source will be compensated by a higher expected yield and better quality of the produce. The reasons to select onion were its large area under cultivation in India and two agronomic issues which prilled potassium nitrate (Qrop® K) would be particularly suited to solve:
1.    First agronomic issue is that onion is a chloride sensitive crop, and a chloride free potassium source is expected to bring a strong benefit for yield.
2.     Second issue is low price security in onion due to fluctuating market prices. Farmers wish to be better able to steer harvest timing and this is an incentive moving cropping practice towards drip-irrigation. Currently only 1- 2% percent of the onion is under drip-irrigation. Qrop® K potassium nitrate is easy to use as basal and top dress application in both flood and drip-irrigation systems. 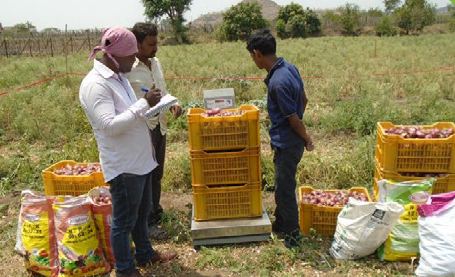 Figure 4. Size and colour differences in the treatments of trial I. The onions receiving prilled potassium nitrate (QropTM K), are visibly larger and of deeper purple colour than the onions harvested from the control treatment.

To demonstrate the benefit of Qrop® K (potassium nitrate) for onion growers, SQM and Coromandel SQM (India) Pvt. ltd organized trials in the Pune district of Maharashtra state. The trials were coordinated by Dattatray Fere. The Maharashtra state has 30 % share in area and production of onion in the country.
The following objectives were defined for these trials:

Trials were conducted in two locations in Maharashtra state (Table 1). The trials started in rabbi season, i.e. January 2016 and were harvested in April 2016. Trial I contained three treatments, Trial II two. Trials were done on onion variety ”Fursungi” on black cotton soil with high clay content and pH ranging from 7,2 to 7,6. Farmers’ practice NPK is taken from recommendations published in the “Directorate of onion and garlic research centre”. The recommendation for onion grown in the rabbi (cool) season is 110:40:60 (N: P2O5:K2O) per ha. N is divided into three equal splits viz; 10, 30 and 45 days after transplant and K2O is divided into two equal splits at 10 days and 45 days after transplant.

Table 1. Detail of the two trials conducted in two locations in Maharasthra. 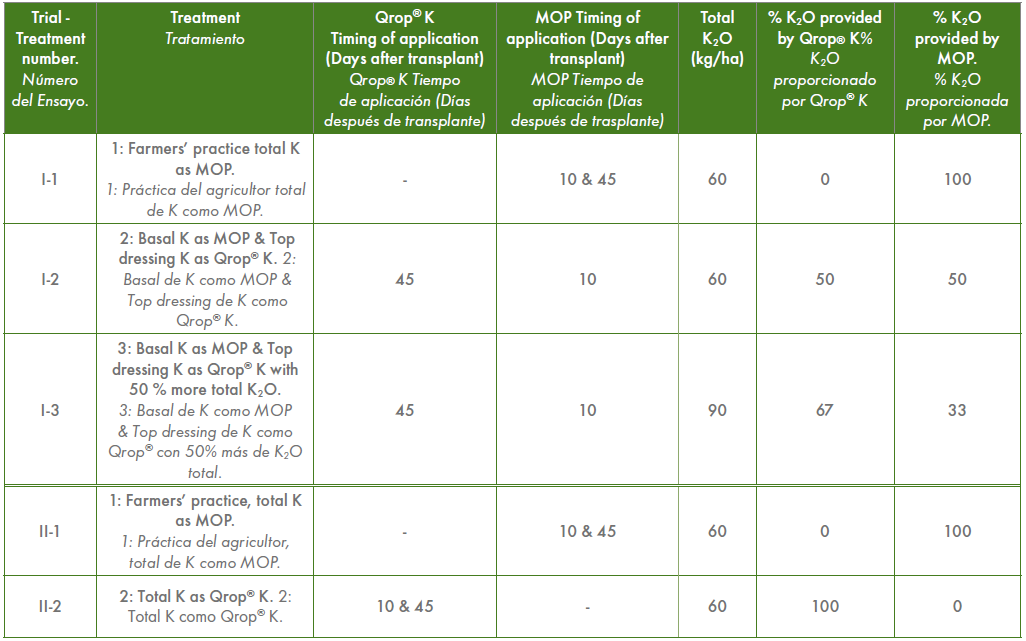 The trials showed clearly the benefit of potassium nitrate as the preferred K-source for onion over MOP. In all treatments using Qrop® K (potassium nitrate) the yield was higher than the farmers’ control with MOP as the sole K-source (Table 2). Increase of the total level of potassium, with 67% of the K provided as Qrop® K (trial I, treatment 3) resulted in the highest increase of yield (32%). At an equal dose of K, yield increased 27% over the farmers’ practice by replacement of 50% of the total K with Potassium Nitrate as Qrop® K in trial I and by 17% by replacement of 100% of MOP by Qrop® K in trial II.

Yield increase was mainly due to bigger onions. Indian growers favor bigger onions, as this reduces the number of onions per crate, making the onions more attractive in market display.

Table 2. Agronomic results of the trials. Yield was determined on plots of 100 m2 per treatment. The average number of onions per crate and bulb diameter was based on a sample of 10 crates or onion bulbs. 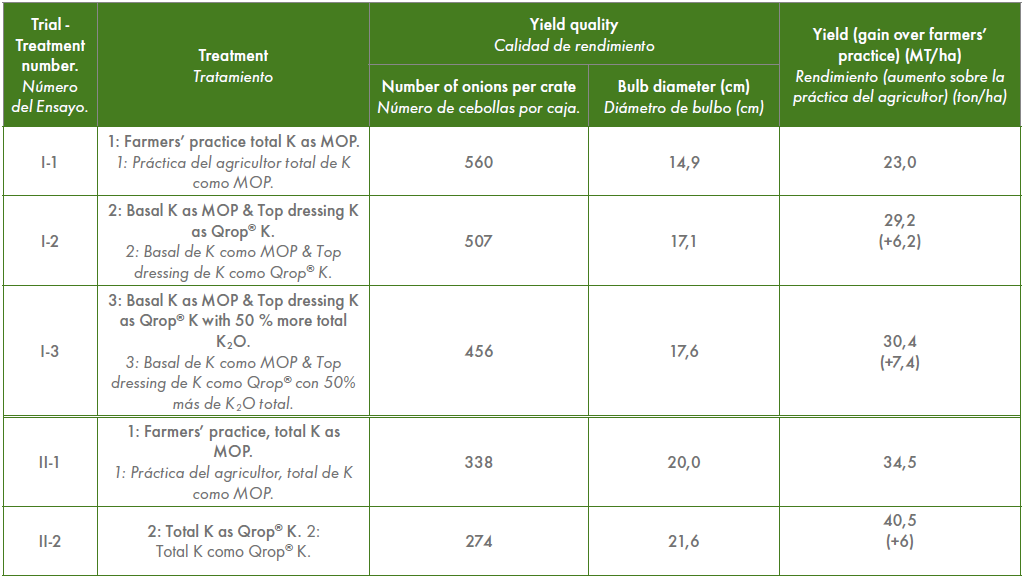 Costs for K are increased by using Qrop® K to a maximum of 12% of the total cultivation costs when all MOP is replaced with potassium nitrate (Table 3). At a price of 10.000 INR/MT (~150 USD/MT), and 60 kg K2O/ha, the break-even extra yield for these extra costs is 1 MT/ha if all potassium is provided as Qrop® K, and 0,4 MT/ha if 50% of the potassium is provided as Qrop® K. Use of potassium nitrate resulted in more than 6 MT/ha higher yield (Table 2), to show that this break-even point was easily met.

In conclusion, it has been shown that potassium nitrate is the preferred K-source for onions in India. The results of these trials will help to persuade farmers that the investment in optimal nutrition is easily returned by the increased quantity and quality of their produce. 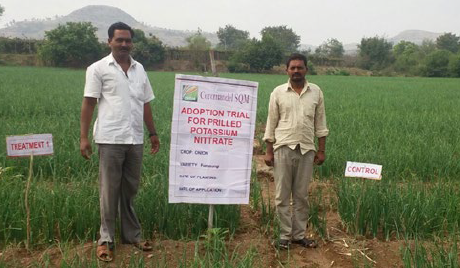 Figure 5. Trial II with the farmer and field staff . The crop stand of the onions treated with potassium nitrate (Treatment 1) is visibly better, with larger plants of a darker green colour. 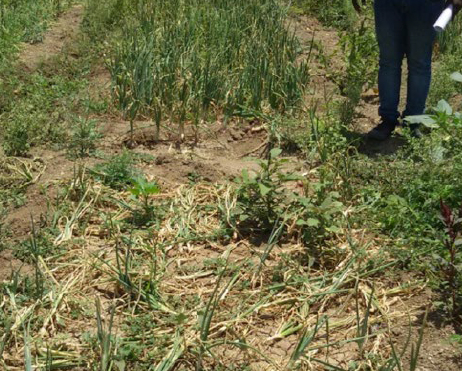 Figure 6. Visible difference in treated and control plot at the time of harvesting of trial II. The farmers’ practice (front) onion tops are already falling over as a sign that the bulb is mature, whilst the potassium nitrate treated plot (back) is still green.

Table 3. Economical results of the trials. Gross income was based on the onion yield in MT/ha and an average price of 10.000 INR (~150 USD) per MT. Increased price due to increased crop quality was not taken into account. Total cost of cultivation was based on actual costs made by the grower on each trial location for: Seedling and transplanting, fertiliser and manure cost, plant protection, labour and intercultural operations. 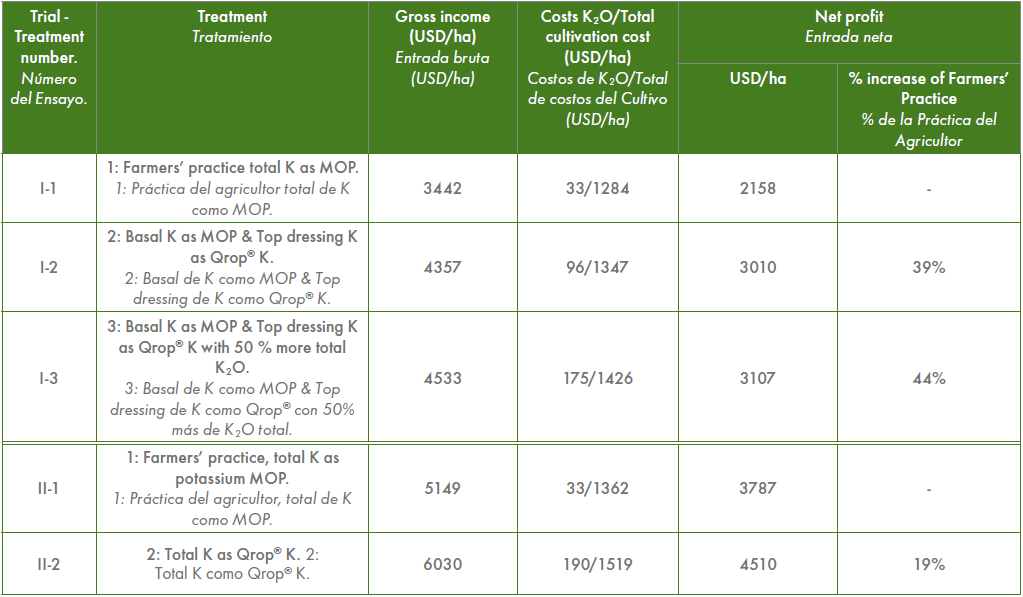