Why potassium nitrate is the preferred fertilizer for the tobacco crop?

Potassium nitrate (KNO3, NOP) is the only binary fertilizer that consists of the two major macro-nutrients nitrogen and potassium, which are required by most crops at largest amounts, and generally- at similar rates. Therefore, when using potassium nitrate, both nutrients are taken up parallelly, at the high rates, required by the plant, unlike the situation occurring with e.g. potassium sulphate or potassium thio-sulphate, in which the sulphate anion that is required at much lower rate is left behind in the soil, building up high concentrations, and producing a salinity problem, and reducing soil pH. These latter features are specifically important for the tobacco plant which is sensitive to both salinity and to excessively acidic soil.

Most crops have some sensitivity to the chloride anion (Cl–). But the tobacco species belongs to a large group of chlorophobic crops, which are highly sensitivity to chloride. This characteristic manifests itself as reduced growth rate under low chloride concentrations in the soil solution. However, high Cl– concentrations result in complete plant death. Such cases are very common when using the cheap potassium chloride (KCl, MOP) as the K source for the tobacco nursery, or for the field. Potassium nitrate on the other hand, is virtually chloride-free, so tobacco plants are not exposed to the presence of the toxic chloride anion.

C) Potassium nitrate supplies the plants with nitrate-nitrogen. This implies the following advantages:

1. High nitrogen availability is critically important to the vegetative development of the tobacco plant during a lengthy stage of its growth cycle, starting at the 3rd and continuing up to the end of the 5th week after planting.  This stage is characterized by an intensive and rapid vegetative development. Insufficient N supply at this stage decimates plant's leaf productivity. The uniqueness of the nitrate is its immediate availability to the plant; thus, the plant can utilize it for building its proteins and nucleic acids within minutes after being integrated in the soil solution by fertigation, or by soil application, followed by rainfall or by irrigation. Nitrate is, therefore, blessed by its excellent NUE (nitrogen use efficiency).

Contrarily, ammonia (NH3), ammoniacal (NH4+) and ureic (NH2) nitrogen fertilizers, require some time of biological or biochemical nitrification in the soil, in order to perform best as nitrogen carriers for the crops. This means that only nitrate-nitrogen should be applied to tobacco fields at the aforementioned growth stage. During the said latent time, these non-nitrate fertilizers lose a remarkable part (as high as 20-40%) of their nitrogen to the air, by volatilization, which is oxidation to the "greenhouse gases" nitrous oxide (N2O), nitric oxide (NO) and nitrogen dioxide (NO2).

2. Thanks to its similarity to Cl– by size and electrical charge, NO3– successfully competes with chloride anions on uptake by the plant roots. So, every nitrate anion prevents one chloride anion from poisoning the plant. Nitrate is, therefore, playing an important role against chloride toxicity that was mentioned earlier. This role is further described in the following paragraph dedicated to potassium.

3. Being an anion, nitrate promotes the uptake of the important cations, i.e.  K+, Ca2+, Mg2+, Fe3+, Mn2+ and Zn2+. This role cannot be played by any of the electrically neutral or cationic nitrogen forms mentioned above. Moreover, ammonium, as a cation competes with the said cations, therefore, increased ammonium proportion impedes the uptake of potassium, calcium and magnesium, rendering them more prone to leaching by rainfall.

4. In order to keep electrically neutral, whenever an NO3– anion is taken up by the plant, the roots exude one OH– unit to the soil. The result is that the soil becomes a bit more basic, which is an important feature when the tobacco plant grows in acidic soils with pH≤5.2, which increases the risk of Al and Mn toxicity to the plant.

D) The advantages of potassium to all plants, with a special focus on tobacco:

5. Adequate potassium levels in the plant enhances internal physiological processes of resistance and resilience against various abiotic stresses, such as heat, chill, drought and salinity. Moreover, it increases also internal resistance mechanisms against insects and pathogenic fungi and microbes, producing thereby healthy and virtually pest- free leaves. These result in a longer field longevity of the crop in good shape, and accumulating higher dry matter.

6. Other specific advantages of adequate potassium level in the tobacco plant are enhancement of the light-yellow hue of cured leaves, as well as its combustibility and optimal texture.

7. Potassium does not concentrate at any specific plant organ or tissue. It is found in the entire plant shoots and roots, due to its multiple functions in the living plant, such as its involvement in dozens of physiological enzymatic processes. However, potassium cation (K+) has a specific role in the water management of the plant. It is the only cation that controls the opening and closure of the millions of stomata of the plant. Hence, it performs a universal role in terms of making the best usage of the water within the plant, or, in a scientific term it improves the water use efficiency and water productivity of the plant. 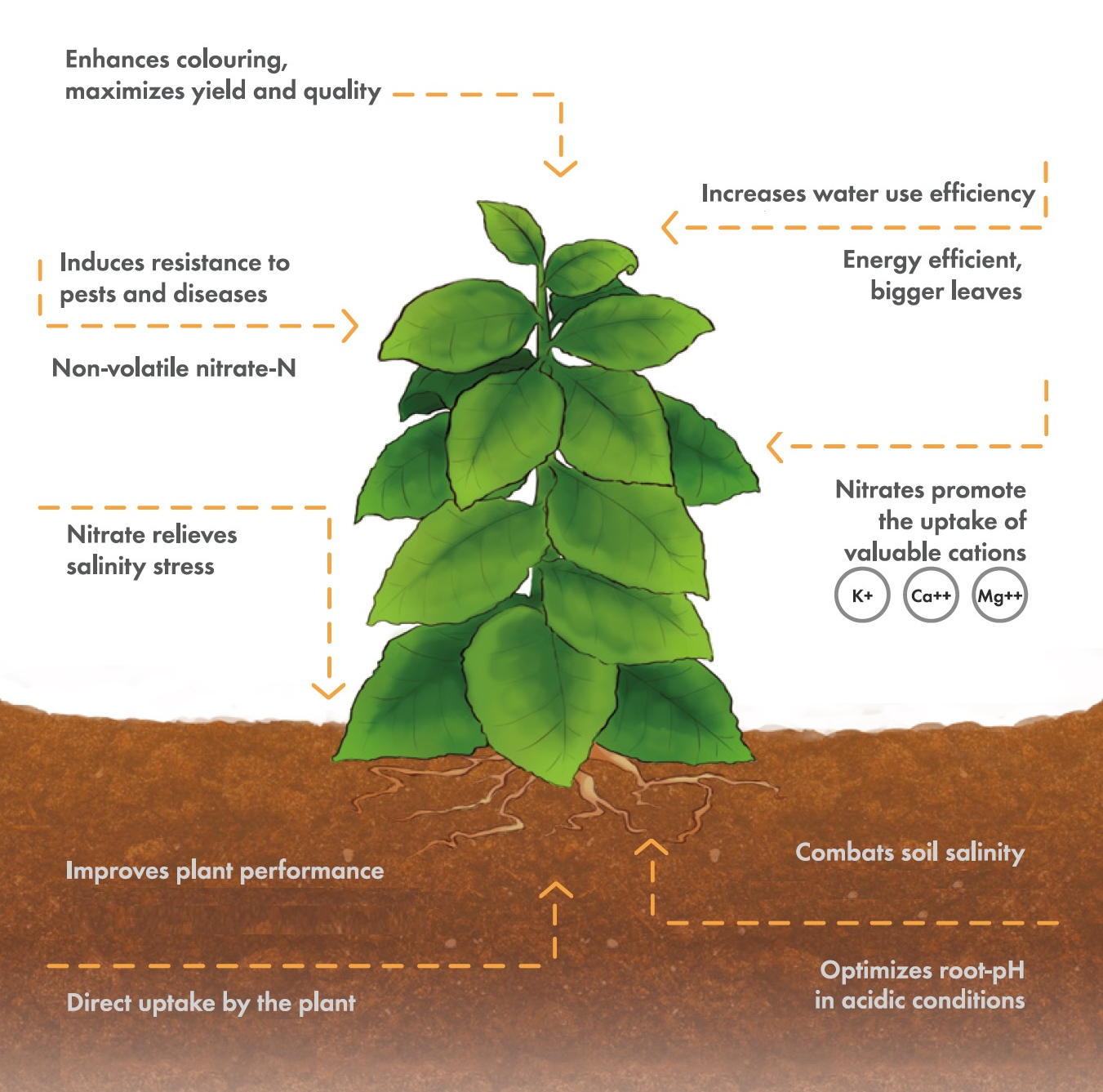