In the Indian River area of Florida (USA), the effect of potassium sprays during the post-bloom and summer periods was studied, to determine if the size of grapefruit could be increased. ‘Marsh’ grapefruit trees were used in a randomized complete block design with 4 replications of each treatment. Equal ratios of K2O of 12 kg K2O/ha and 24 kg K2O/ha were applied with 28 and 56 kg/ha KNO3, and with 38 and 76 kg/ha MKP, respectively. Two rates of MKP and two rates of KNO3 were used in block A, whereas in block B single rates of MKP (76 kg/ha) and KNO3 (56 kg/ha) were applied and compared with the non-sprayed control plots. Foliar sprays were applied post bloom on April 21 and May 19, and later on August 9 and September 14. Post-bloom foliar K applications to Florida grapefruit were shown to be effective in increasing average size of grapefruit. Both MKP and KNO3 treatments statistically significantly increased the mean diameter of grapefruit compared to the control in both blocks, except the MKP-38 treatment in block A (Figure 1). Both the MKP-76 and KNO3-56 treatments in Block B had increased fruit enlargement compared to the control treatment at each measurement date. The fruit on trees sprayed with MKP and KNO3 had increased 1.9-2.4 mm more than fruit from control trees by the time the November 28 MKP-76 measurements were taken. Around 40% of the foliar K-treated fruit increased 20 mm or more from August 4 to November 28, compared to 20% of the control treatment fruit.

Figure 1. Effect of foliar sprays on the grapefruit size. 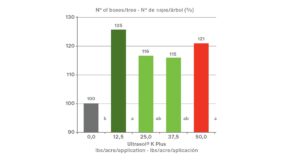 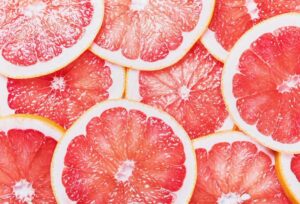