Foliar KNO3 was provided along with combinations of basally applied urea, SSP (Single SuperPhosphate), KCl, and 8 t/ha of FYM (spring rice only). Foliar applications occurred at one or more different growth stages: Active Tillering (AT), Panicle Initiation (PI), and End of Flowering (F), and each application provided 300 liters of a 3% concentration, equal to 9 kg KNO3/ha, or 4 kg K2O/ha and 1.1 kg N/ha. Hills from 4 m² of area centered in each replicated plot were harvested for grain yield determination with 14% moisture. Yield components were determined from 10 hills collected from the sampling zone surrounding the harvest area, as was the procedure for determining dry biomass at the AT, PI, and F stages.

The response to direct FYM application can be quantified in spring rice and was significant (p = 0.05) at the degraded soil site at Bac Giang, but not at the alluvial soil site at Nam Dinh (Table 1). In summer rice, check plots showed a significant difference between the basal NP treatment and basal NP plus foliar KNO3applied at each of the three growth stages selected. Reliance on basal K alone produced yields that were equal to those resulting from foliar KNO3 alone at three of the four sites (i.e. excluding the summer rice season at Nam Dinh) where three splits of foliar KNO3 was superior. Supplementation of the full basal K rate with three foliar KNO3 applications (T9) produced the highest average yield response across seasons and sites (Table 1). This treatment produced 11% more spring rice and 16% more summer rice on degraded soil; 16% more spring rice and 15% more summer rice on alluvial soil compared to use of basal KCl alone (T3). Single sprays resulted in a more modest yield response of 7% averaged over sites and seasons, while two sprays generated an average yield response of 11% and three sprays an average yield response of 15% (Figure 1). Interestingly, significantly higher yields (10% average response) were also obtained with the combination of three foliar KNO3 sprays and up to 50% less KCl provided through a base dressing (T10 and T11). 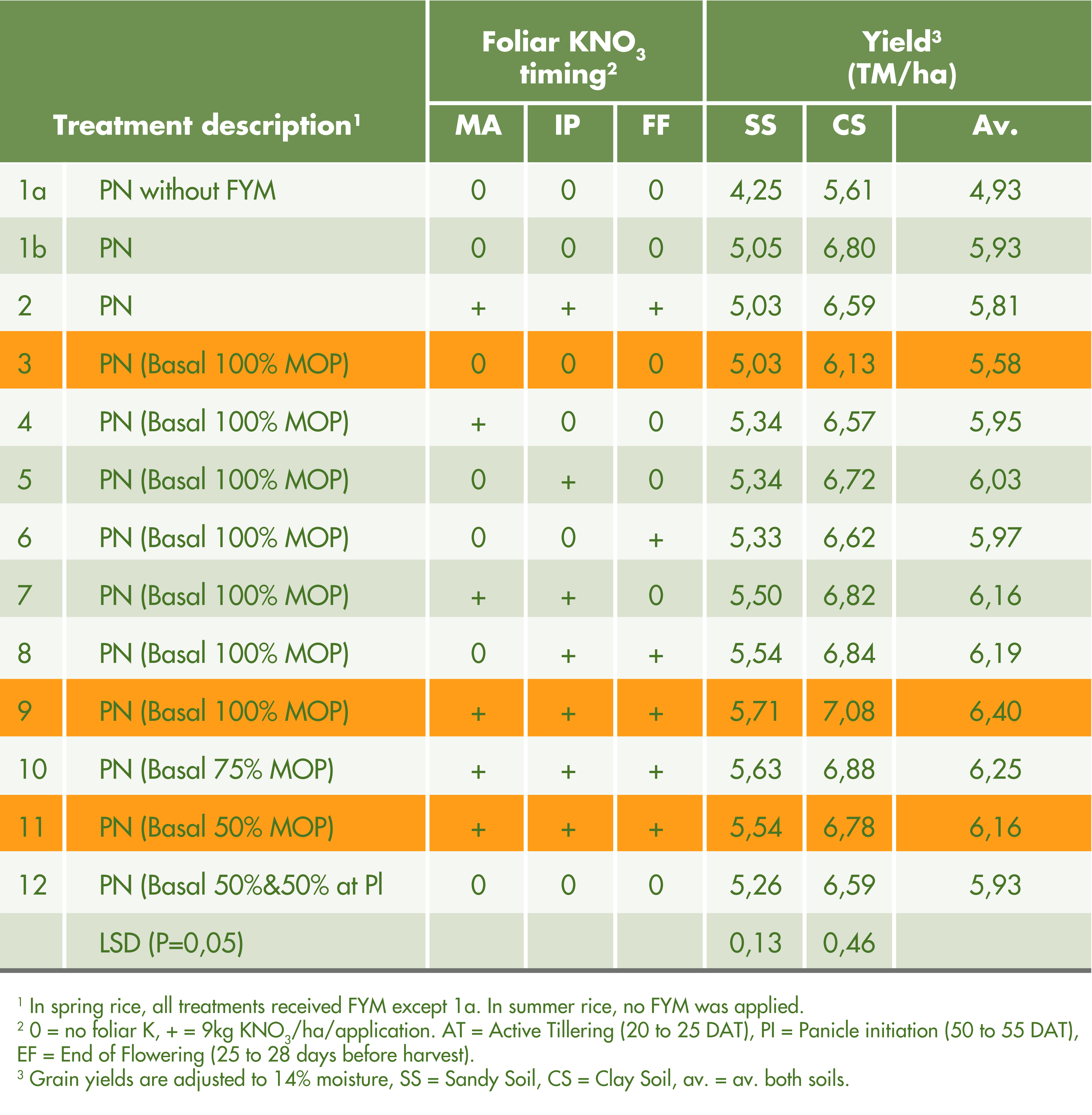 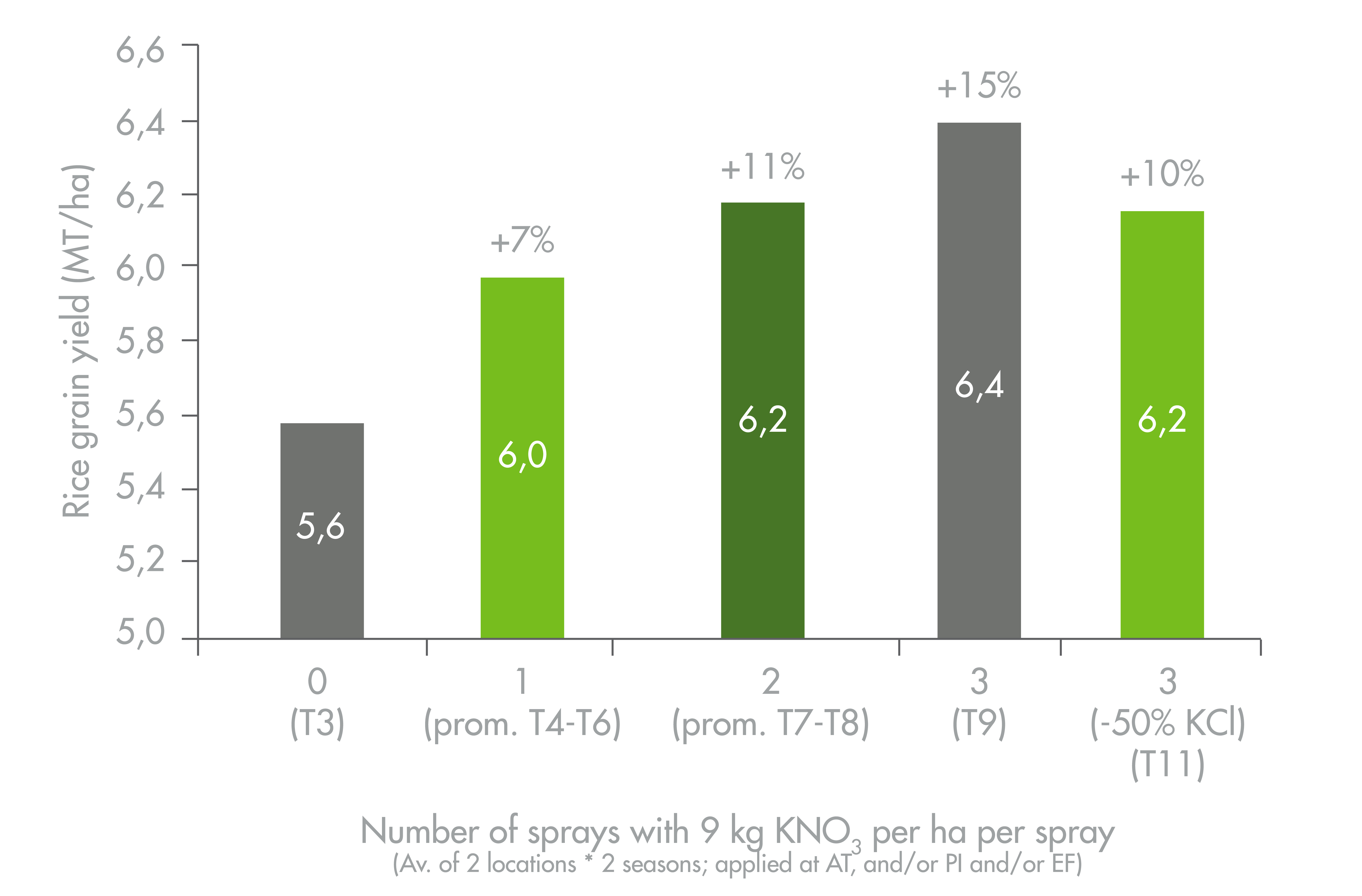 Figure 1. The effect of number of foliar treatments on the rice grain yield (MT/ha) in two growing seasons spring and summer on two trial sites (AT= active tillering, PI= panicle initiation and EF= end of flowering).

Economic analysis found a steady increase in net income under single, double, and triple sprayings at both the degraded and alluvial sites (Figure 2). In addition, net income was maintained when basal KCl was decreased by up to 50% in combination with three foliar KNO3 spray applications, as well as for the treatment that completely substituted basal KCl with three foliar ap­plications of KNO3 (T2). 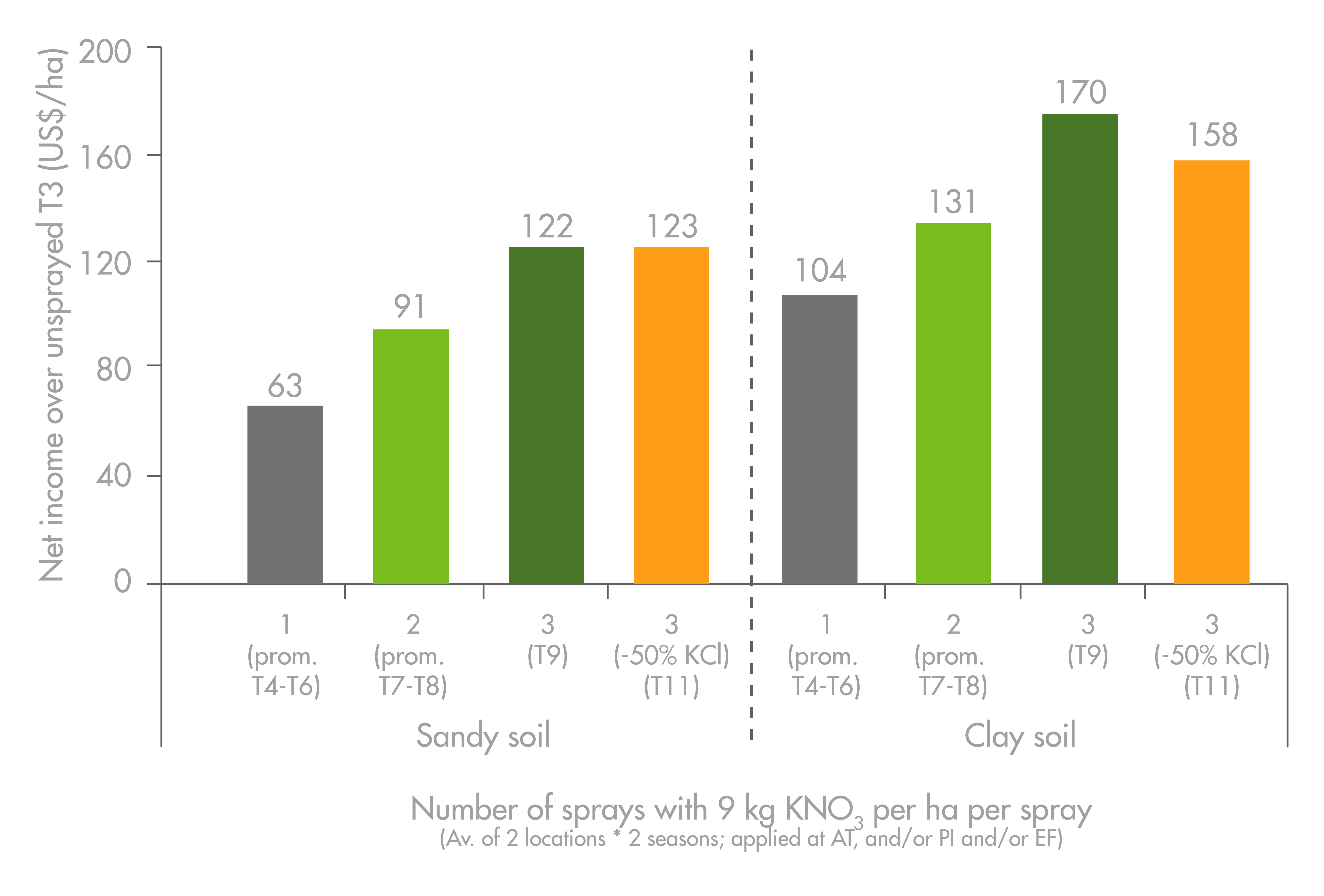 Figure 2. The positive effect of potassium nitrate sprays on net income (US$/ha) over T3 (100% KCl and no foliar spray). 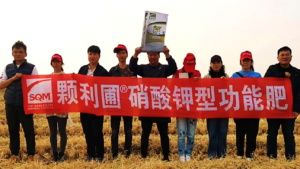