Nitrogen (N) is a key component of most organic compounds found in plants. Plant requirements for nitrogen are species-dependent and may vary within plant parts and developmental phase. However, suboptimal or excess N levels may result in reduced growth, and toxicity may develop in plants that receive high proportions of NH4+ as opposed to NO3- as a source of nitrogen.

Potassium (K) is highly abundant in plants, and has a significant effect on nitrogen nutrition. It affects NO3- uptake by being a counter-ion for NO3- translocation from root to shoot. Potassium is reported to have an antagonistic effect on NH4+ uptake in high concentrations, and both are cations, have a similar diameter of hydrated ion, and have a similar effect on the electrical potential of the cell membrane.

A study in bell pepper cv. Dársena was performed in a greenhouse in north México in 2009-2010 to delineate the response to varying ratios of NO3-:NH4+, and increasing concentrations of K in the nutrient solution. Thirty-three-day old bell pepper plants were transplanted to pots filled with 12L sphagnum peat moss, drip irrigated as regulated by seasonal plant demand, with a constant leaching fraction of ~30%. Nutrient solutions with 13 mM total N were prepared with varying percentage of NO3-:NH4+ (100:0 (control), 75:25, 50:50 and 25:75) and three concentrations of K (6 (control), 9 and 12 mM). Other nutrients were supplied at Hoagland’s nutrient solution concentration.

The bell pepper plants were tolerant to moderate proportions of ammonium (NH4+ content 50%, 25% or lower). Higher proportion of ammonium resulted in vegetative growth reduction and drop in fruit production at 6 mM K in the nutrient solution. This negative effect is attributed to substrate acidification, as a result of NH4+ uptake though a proton-cation antiport, resulting in H+ extrusion. A linear decrease for all growth parameters was detected regardless of K concentration when substrate pH became less than 5,1.

Increasing K in the nutrient solution did not ameliorate the growth of vegetative parts, but did compensate for reduction of yield when K was increased to 9 mM (Figure 1). At this concentration of K, yield was enhanced at 25% NH4+ in the nutrient solution: this greater yield when both N forms are supplemented has been attributed to lower energy cost of NH4+ assimilation opposed to NO3- assimilation, when provided at a proportion not yet high enough to impose toxic effects on plant growth.

Calcium and magnesium content in the leaves was decreased in all treatments when ammonium was present in the nutrient solution, and calcium content of the leaves was lower with higher supply of potassium in the nutrient solution. Although cation-cation competition between between these cations and ammonium cannot be ruled out, in this study the decrease was associated with the acidification of the substrate at higher ammonium proportions.

In general, leaf K was increased with increased supply of potassium, and decreased with increasing proportion of ammonium. The authors suggest that increased K ameliorated the response in yield of bell peppers by competing with NH4+, a reasoning supported by the finding of the highest leaf and root K concentrations when only nitrate was used as source of N. Increased K was also found to enhance photosynthesis rate at the optimal nutrient composition of 9 mM K and 25% NH4+ in the nutrient solution. Additionally, potassium supplementation may have alleviated stress resulting from excess ammonium through maintenance of water relations by optimal K content of the plant tissues, and modification of carbohydrate allocation to the fruit. 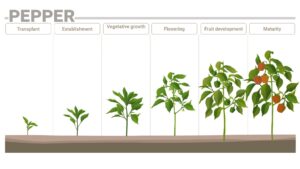 SPN in the Field – Ultrasol®ine in Sweet Pepper 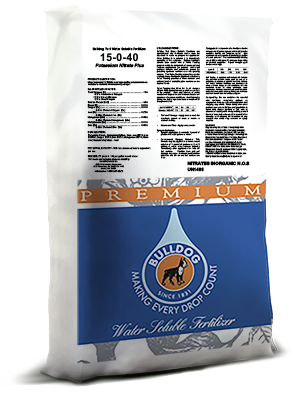