A study conducted during the 1997-98 through 2001-02 seasons in "Sunburst" tangerine (Citrus reticulataBlanco x C. paradisi Macf.), located in Indian River County, Florida (USA) investigated the effect of foliar potassium nitrate sprays on fruit size and yield. Trees were grown on a Riviera fine sand soil and trees were either untreated or had 3 foliar applications of 28 kg KNO3 per hectare per spray, in a randomized block design with four replications. Sprays were applied during the dormant (February), post bloom (April) and summer (July) stage. In each of the seasons the KNO3 treatment resulted in 30% or more fruit of size 120 and larger during the first spot pick. In the two years when all the fruit from each tree was harvested, the potassium nitrate treatment averaged 23% more total fruit of size 120 and larger for the entire season. In this experiment, three 28 kg/ha KNO3 foliar applications per year were effective in increasing fruit size, and thus Gross Packed Value (GPV) for "Sunburst" tangerines (Figure 1). Average season total increase in GPV for the KNO3 treatment was US$ 13,52 per tree (US$ 6047/ha) compared to the control. These applications, which added only minimally to production costs, were able to increase returns of growers due to increased numbers of larger-sized fruit with no apparent detrimental effects on fruit shape or internal quality. 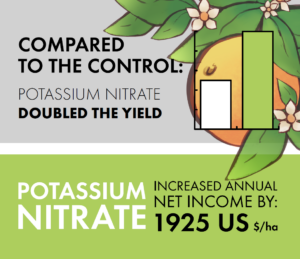 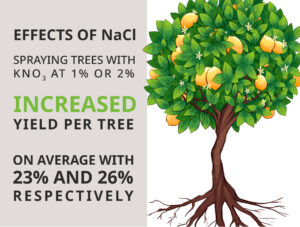 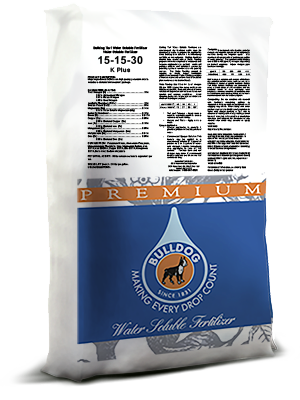