The objective of the study was to evaluate the effect of potassium nitrate and paclobutrazol (PBZ) on flowering induction and yield of ‘Haden’ mango. The experiment was conducted with 5-year-old ‘Haden’ trees grown in a sandy loam soil with pH 7 at the Central University Research Station in Maracay, Venezuela. The trees were laid out in a Randomized Complete Block Design with 3 replications, 8 treatments and 3 trees per experimental plot. The KNO3 sprays were applied at 24, 36 or 48 g/L and divided in 3 applications in September, October and November during the seasons 1993-1994 and 1994-1995. Paclobutrazol was soil applied with different concentrations (2,5, 5, 10 and 15 g a.i./tree).

The number of fruits significantly increased with the potassium nitrate sprays at 36 and 48 g/L and high PBZ concentration (15 g a.i./tree) during 1994 compared to the control and other treatments. PBZ and KNO3 treated trees at high concentrations were harvested earlier and produced more kg fruit per tree as compared to the control and the PBZ treatments at low concentrations. Concluded was that high KNO3 doses (3,6 and 4,8%) induced earlier flowering and harvesting (30-45 days sooner) compared to control trees. Also yields were increased and apparently the alternate bearing was reduced (Figure 1).

Figure 1. Effect of KNO3 sprays on the number of mango fruits harvested in two consecutive seasons. Means followed by the same letter do not differ statistically (Duncan Multiple Range α=0,01). 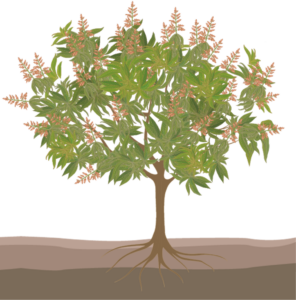 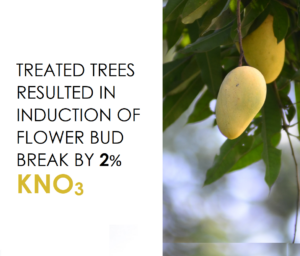