An experiment was conducted in Khun Wang (Thailand) on rest-breaking products to modulate rest and flowering on low-chill peach cv. Florda Grande and nectarine cv. Sun Wright. Trials were conducted on 5-year-old tress using randomized complete block designs, with treatments applied to six single tree replicates. Treatments were: control (water), KNO3 5%, Waiken (fatty acids) 2%, Waiken 2% + KNO3 5%, Waiken 4% and Waiken 4% + KNO3 5%. Rest-release treatments were applied on 7 November 2001 in year 1 and on 20 November 2002 in year 2. All treatments were already sprayed eight times with 2,5% KNO3 in autumn. The combination of Waiken + KNO3 exhibited a higher bud break percentage compared to the control in peach and nectarine (Table 1 & 2), advanced flowering by up to 1-2 weeks and concentrate flowering intensity. Waiken and KNO3 may increase fruit set and resulted in increased yield per tree in Florda Grande and Sun Wright varieties (Table 1 & 2). No effect on fruit quality of peach and nectarine was found in this study. 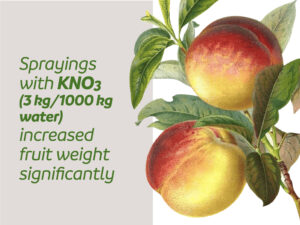