The aim of the study was to determine the influence of foliar application of potassium nitrate, on stimulation of flowering to improve fruit production in mango clone ‘Chok Anan’. This field experiment was conducted in Selangor, Malaysia, on one and five year old trees to study the difference in response to potassium nitrate between trees of different ages. Treatments were started early May 2011 and were repeated at two week intervals until flower initiation. Mango shoots were sprayed three times with KNO3 in three dose rates: 1%, 2% and 5% in the spray solution, with Sapol added as a wetting agent. The experiment was arranged in a randomized complete block design.

The results differed between young and older trees. One year old mango trees did not produce inflorescences in the control treatment nor on terminal buds of shoots sprayed with 2% and 5% KNO3. Foliar application of 1 % KNO3 in the spray solution did result in 14,5% flowering shoots in the canopy 5 weeks after the treatment. Flowering induction was observed on new leaf flush produced 2 months after the foliar application of KNO3 in the higher concentrations (2% and 5%).

In contrast, a high degree of flowering induction was observed for the five year old mango trees sprayed with 2% and 5% KNO3, resulting in 80% and 70% inflorescence bearing shoots (Figure 1). More flowers resulted in a higher number of fruits produced per tree, and ultimately, increased fruit yield. Best results were observed with 2% KNO3 in the spray solution, applied on the shoots of five year old trees (Figure 1). 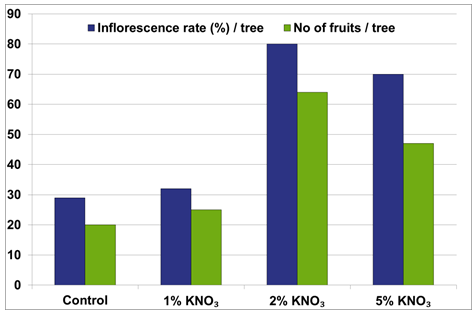