A field trial was conducted in a plastic greenhouse at the National Research Centre in North Egypt, and repeated during two successive seasons in 2011 and 2012.

The study aimed to determine the effect of supplemental foliar application with either potassium nitrate or calcium nitrate on growth, yield and quality of cucumber. Transplants of the cucumber hybrid cultivar ‘Pracodo’ were transplanted to a sandy soil with pH of 8,2 in the third week of December in both seasons and watered by drip irrigation.

Five foliar treatments were tested: control (distilled water spray), 10 and 15 mM calcium nitrate, and 10 and 15 mM potassium nitrate. Foliar sprays were applied three times with a hand-held sprayer, starting 20 days after transplant and repeated on a 15 days interval. Plants were sprayed till the point of complete wetting at each application.

All treatments increased vegetative growth expressed as plant length, number of leaves per plant and leaf area compared to the control. However, only the foliar applications with higher concentrations (15 mM) of both compounds resulted in statistically significant differences (LSD at 5% level).

Foliar application with 15 mM KNO3 increased the number of flowers per plant (55,8) and percentage fruit set (46,6%) compared to the control (47,9 flowers/plant and 40,8% fruit set). Also the highest and statistically significant amounts of N, P, K and Ca  were found in the tissues of cucumber plants treated with three foliar applications of 15 mM KNO3 followed in descending order by spray of 10 mM KNO3 and both concentrations of calcium nitrate.

Additionally, KNO3 sprayed at both concentrations resulted in the highest increase of percent total soluble sugars (TSS) and percentage dry matter of cucumber fruits. The highest fruit yield and best growth vigor of the cucumber plants treated with 15 mM KNO3 foliar spray may be explained by the observed highest uptake of the elements N, P, K and Ca by these plants.

Table 1. Effect of calcium nitrate and potassium nitrate sprays on number of fruits, average fruit weight and total yield of cucumber plants. Means followed by the same letter are not significantly different (LSD, 5%) 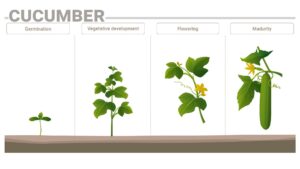 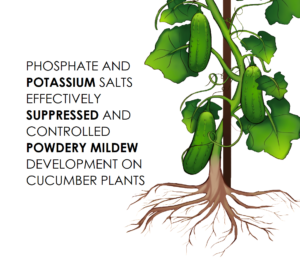