Leaf analysis and their sampling time

Leaf of the middle or middle third of the new spur on the tree periphery, with or without fruit, between January 15th and the end of February (south hemisphere).

Leaf analysis levels and their interpretation 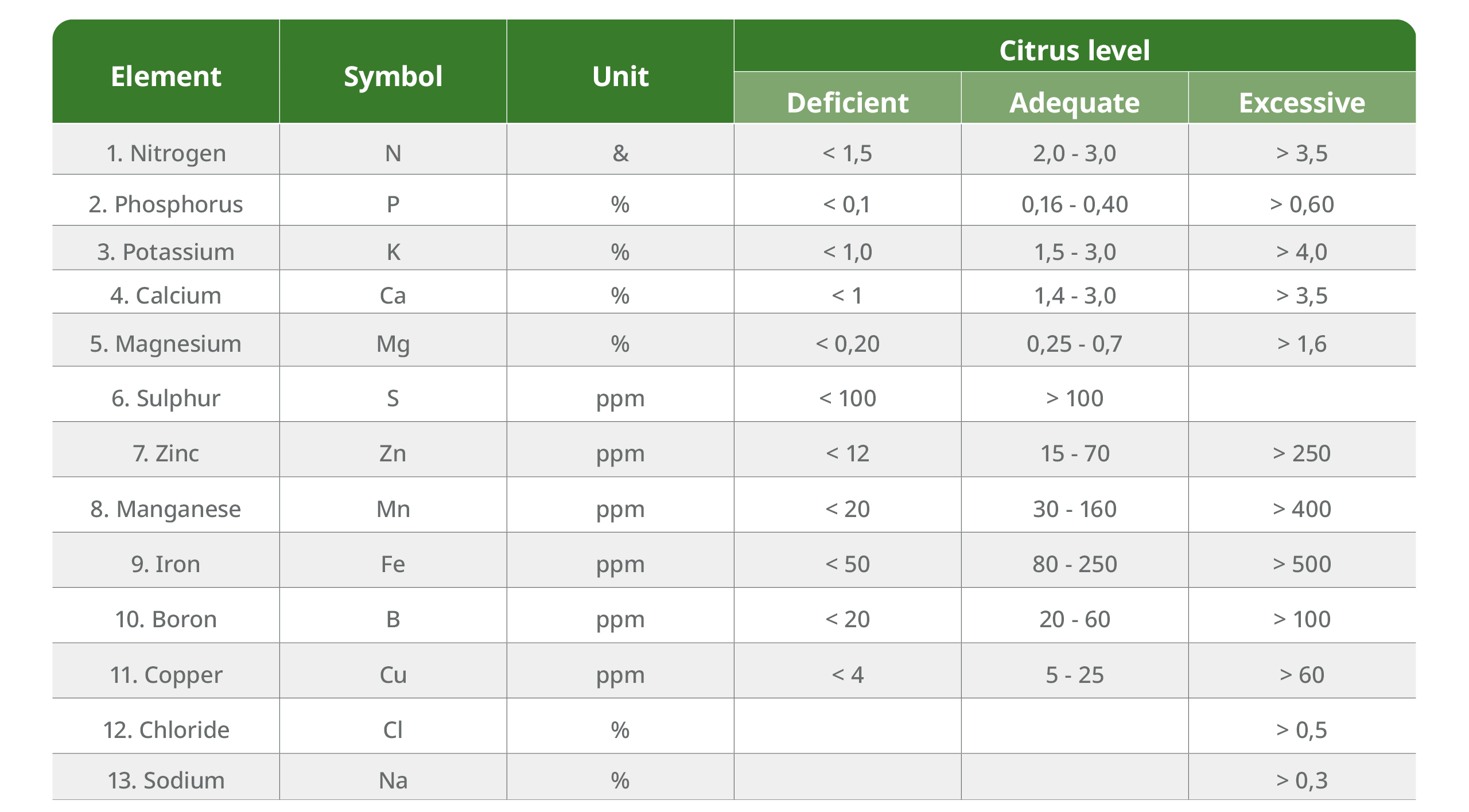 Deficiency symptoms of the main nutrients, and correction recommendations

Nitrogen deficiency is manifested on the new leaves, which take on a pale green color, and in the mature leaves, which take on an orange, red or purple colour, and fall prematurely. The fruits, buds and flowers are scarce, the fruits are markedly colored. But sufficient supply of nitrogen, enhances tree development, favors the growth of the twigs, and the leaves' size. Plants well supplied with nitrogen have fruits with better color and they mature evenly. The tree responds well to N application when soil nitrogen is low.

Both sweet cherry and sour cherry varieties respond well to the applications of nitrogen. It has been proven that applying nitrogen fertilizer in furrows, on both sides of the row, is more efficient than broadcasting between the rows. Correction of the deficiency is done by soil application of urea (CO(NH2)2), sodium nitrate (NaNO3), potassium nitrate (KNO3) or ammonium sulfate ((NH4)2SO4).

Nitrogen deficiency is corrected by fertilizing with a nitrogen-carrying fertilizer, either by soil application or by fertigation.

Spraying with nitrogen (N) is not recommended as it can scorch the leaves, and it will have no effect on the fruits size when they mature.

Phosphorus deficiency is rather uncommon, since phosphorus application hardly produces any results, even when the soil shows low content of this element. Excessive levels of this element aggravate nitrogen deficiency, same phenomenon occurs in other species too. P deficiency shows no foliar symptoms.

It is corrected by applying a phosphorus- carrying fertilizer to the soil, or applying phosphoric acid by fertigation.

Under potassium deficiency, the leaves become bluish-green and their margins tend to coil parallel to the midrib. Under more severe deficiency, leaves scorching and necrosis occur. Some authors point out that the vigor of the tree and the size of the fruit depend on the supply of potassium more than on any other nutrient. The deficiency affects the development of the tree and its fruit size. Leaves with less than 1% of potassium indicate deficiency.

Magnesium deficiency is displayed initially by interveinal chlorosis of the mature leaves, which then become necrotic. In general, the leaf margins show the deficiency at early stage. Mg deficiency is very rare in cherry trees.

It is corrected by applying magnesium sulfate (MgSO4), (also called 'Epsom Salt') to the soil. Alternatively, this fertilizer can be applied by fertigation.

Calcium deficiency in cherry trees is very rare in Chile, and foliar symptoms of this deficiency are not known.

Calcium carbonate should be applied pre-planting to the soil, for improving soil pH and availability of calcium in the cation exchange complex.

Sulphur deficiency symptoms are similar to those of nitrogen. Sulphur deficiency is common in soils with very low contents of organic matter. Foliar content lower than 100 ppm of SO4 indicates deficiency. While the mature leaves stay green, the new ones show chlorosis.

This is done by soil application of magnesium sulfate MgSO4, (also called 'Epsom Salt'), or any other source of sulfur such as potassium sulfate (K2SO4). Alternatively, gypsum (CaSO4*2H2O) can be applied to the soil, around the tree.

Zinc deficiency is the most harmful compared to the deficiencies of other minor elements. Zn deficiency is associated with alkaline-pH soils, and/or high soil content of phosphorus (P). Typical symptoms of Zn deficiency are the formation of smaller leaves ("Little leaf"), they develop wavy shape and chlorosis. The chlorosis appears first at the leaves' margins, then it extends to the central rib and to interveinal areas. In extreme cases the chlorosis is total, tending to turn the leaves completely white, and necrosis of the branches starts at their tips and advances to their bases ("die back").

Zn deficiency is corrected by three methods of foliar spray. The first is done at leaf fall, by applying zinc sulphate (ZnSO4) at 0.35% (350g/100L water), without neutralizing the solution. The second is done at early spring, with the same salt, at somewhat lower concentration (300g/100L water), however, this solution should be previously neutralized with 30ml/100L of a concentrated solution of sodium hydroxide (NaOH), prepared by dissolving 1kg of caustic soda (NaOH) in 1 liter of water. The third way is to spray with another zinc-carrying fertilizer.

Manganese deficiency is quite common in cherry trees. As its availability is soil-pH dependent, Mn deficiency takes place under alkaline soil pH, where manganese valence rises four (Mn+4). Mn chlorosis of the leaf margins is very similar to that provoked by zinc deficiency, but unlike the Zn one, Mn deficiency does not affect the leaves' size. Leaves with content lower than 17 ppm (dry weight basis) indicate manganese deficiency. Mn chlorosis is not frequent in acidic pH soils. When there is a multiple deficiency of manganese (Mn), zinc (Zn) and iron (Fe), it is not possible to know the real reason of this chlorosis, unless a leaf analysis is performed.

Mn deficiency is corrected by spraying before leaf fall, or at early spring when the foliage is tender, with manganese sulfate (MnSO4) at 0.3%, neutralized with 30ml/100L of concentrated sodium hydroxide solution (NaOH), and a surfactant. Or, alternatively by foliar spray with any manganese fertilizer, and/or agrochemicals carrying this element.

Alternatively, soils with pH higher than 7,0, can also incorporate sulphuric acid(H2SO4) and phosphoric acid(H3PO4) through fertigation.

Fe deficiency is associated with high-pH soils, and with excessive calcium (Ca). It is manifested by a pale green interveinal discoloration, distributed throughout the leaf. As it progresses, the leaves turn white and their margins show scorching. Fe deficiency symptoms begin in the new leaves and progress towards the mature ones.

It is corrected by acidifying the soil by applying sulfur (S), sulfuric acid (H2SO4) or ammonium sulphate ((NH4)2SO4). Another alternative is foliar sprays with iron chelate (Fe-EDTA), at 2–4 weeks after flowering, a second spray can be done 3 weeks later. Then, ferrous sulfate (FeSO4) can be sprayed 2-3 weeks later. This treatment has been used in sour cherries.

It is also recommended to spray Fe-DTPA chelate at a concentration of 1.2kg/1000L water, 3 weeks after flowering, this can be repeated 4 weeks later.

When there is a deficiency, the fruit can deform, the leaves show interveinal chlorosis and the edges become necrotic. Leaves with less than 19ppm boron (B) (on dry weight basis) show symptoms of B deficiency.

B deficiency is manifested by the following symptoms:

B toxicity can manifest itself when the irrigation water contains 1ppm or more of boron, which does not happen in areas with high quality water. Boron improves the taste of fruit; excessive potassium (K) can decrease boron (B) level in the leaves.

When the foliar analysis shows less than 20ppm (on dry weight basis), and less than 4ppm in the fruit, means there is deficiency.

Correction of B deficiency

Boron deficiency is corrected at the beginning of the season, by spraying the foliage with any product containing high concentration of boron, such as boric acid, or sodium octaborate, (also known as the product 'Solubor') at a concentration of 0.5kg/1000L of water. Borax (11% B; (Na2H4BO7 *10H2O) can be sprayed too, at concentration of 1.0kg/1000L of water. Most effective spraying takes place when there is enough young tender foliage, which can better absorbs the product. It can also be done by spraying with some foliar fertilizer containing boron, like 'Speedfol® B SP'.

No copper deficiency has be found in Chile.

Unsuccessful attempts have been made to relate, cherry fruit cracking with morphological and structural characteristics of the fruit. And it is now concluded that cherry fruit cracking is not the result of excessive water taken up from the soil, but- of external water that is directly absorbed through the fruit skin. This explains the detrimental effect of rainfall, when the fruit is ripening. It takes place at the point of contact between the fruit skin and the drop of water. This water uptake is the result of the high osmotic potential of the mature fruit, rich with carbohydrates. Therefore, the intensity of this disorder depends on the fruit's state of maturity, so it is highly recommended that the fruits should be harvested as soon as they mature.

This damage can be minimized by applying appropriate practices, such as harvesting as soon as the fruit achieves its maturity, especially if rainfall is expected. Very efficient, despite the cost, is to cover the tree rows with plastic sheets.

In the long term, the most effective solution is developing fruit-cracking resistant varieties. Childers cites experiences of different authors who aim to reduce this damage. As can be seen, these theories do not always coincide:

Spraying of growth regulators, like gibberellic acid (GA), helps to reduce the cracking of the fruit.

Powers and Bollen relate this cracking to boron (B) deficiency. Soil applications of 30kg/ha of borax, in Oregon, reduced the damage by 25–50%. It is assumed that boron exerts its effect by increasing the elasticity of the fruits' cellular membranes. Boron sprays can also be done, early in the season.

In Chilean regions growing cherry plantations, there has not been found excessive sodium nor chloride, since the soils and/or irrigation water are not contaminated by these elements. 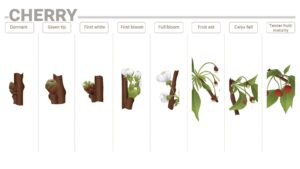