The assimilation of dissolved inorganic carbon (bicarbonate (HCO3-) and CO2), taken up from the soil solution, occurs in the cells of roots of higher terrestrial plants. In root tissue, bicarbonate is transformed to carboxylates, or constitutes a carbon-skeleton used in the synthesis of amino acids. These organic compounds can be transported by the xylem to the shoots where they aid photosynthesis, or remain to be assimilated in the roots for synthesis of carbohydrates.

The availability of dissolved inorganic carbon can influence the rate at which NH4+ can be detoxified by its assimilation into organic compounds. The long term effect of elevated HCO3- contents on plants, depends to a great degree on the form of N (NO3- or NH4+ ) available to them and the pH of the nutrient solution. In a greenhouse in Poland, a trial was performed on tomatoes cv. Perkoz F1 on a hydroponic mineral medium. The aim was to study the effect of the combination of various doses of NO3- :NH4+ in the nutrient solution and simultaneous treatment with bicarbonate, or without it, on the yield of tomatoes and their chemical composition. A constant level of HCO3- was maintained by controlling the pH of the nutrient solution at 6,9, permitting the conversion of almost the whole inorganic carbon pool to bicarbonate. The total N was kept constant at 3 mmol, bicarbonate was supplied at 5 mmol. Sodium nitrate and ammonium chloride were used as the N-sources.

The fruit yield of plants grown with NH4+ as the sole N-source, was approximately 25% lower than that of plants grown on NO3- only (Figure 1). The poorer productivity of the NH4+ plants could have resulted from a reduced biomass production in early stages of growth. When N was supplied as 4:1 NO3- :NH4+ , the fruit yield increased 20% compared to NO3- as the sole N-source. It is possible that this effect is the result of a balanced level of carboxylates and amino acids supplied from the roots via the xylem to the shoot, due to the availability of both nitrogen sources in the root. At 1:1 NO3- :NH4+ ratio in the nutrient solution, yields were comparable to plants supplied only with NO3- .

Measurements of the amount of carboxylate (malate and citrate) in the fruits, led to the general conclusion that the accumulation of carboxylates in fruit was negatively correlated with an increased NH4+ concentration in the nutrient solution. The content of reducing sugars was negatively influenced by NH4+; when ammonium was the sole N-source, the accumulation of reducing sugars in the fruit was 20% lower than for plants grown with NO3- only. When NH4+ and NO3- were applied together, the reducing sugar content was intermediate. Addition of bicarbonate increased the amount of reducing sugars, with the highest increase when combined with NO3-, and it increased the carboxylate content of fruits in all treatments.

In tomato, the carboxylates imported by the xylem can lead to a release of CO2, that can be directly assimilated in the photosynthetic process of the fruit, and on this path contribute to an increase in the accumulation of sugars.

The enrichment of the nutrient solution with bicarbonate stimulated fruit bearing depending on the applied NO3-:NH4+ ratios. The results showed that the best yields were obtained in media containing mainly nitrate with 25% ammonium (4:1 NO3- :NH4+ ) and enriched with bicarbonate. This resulted in an increase of 86% compared to that of plants grown NH4+ as the sole N-source, without bicarbonate. 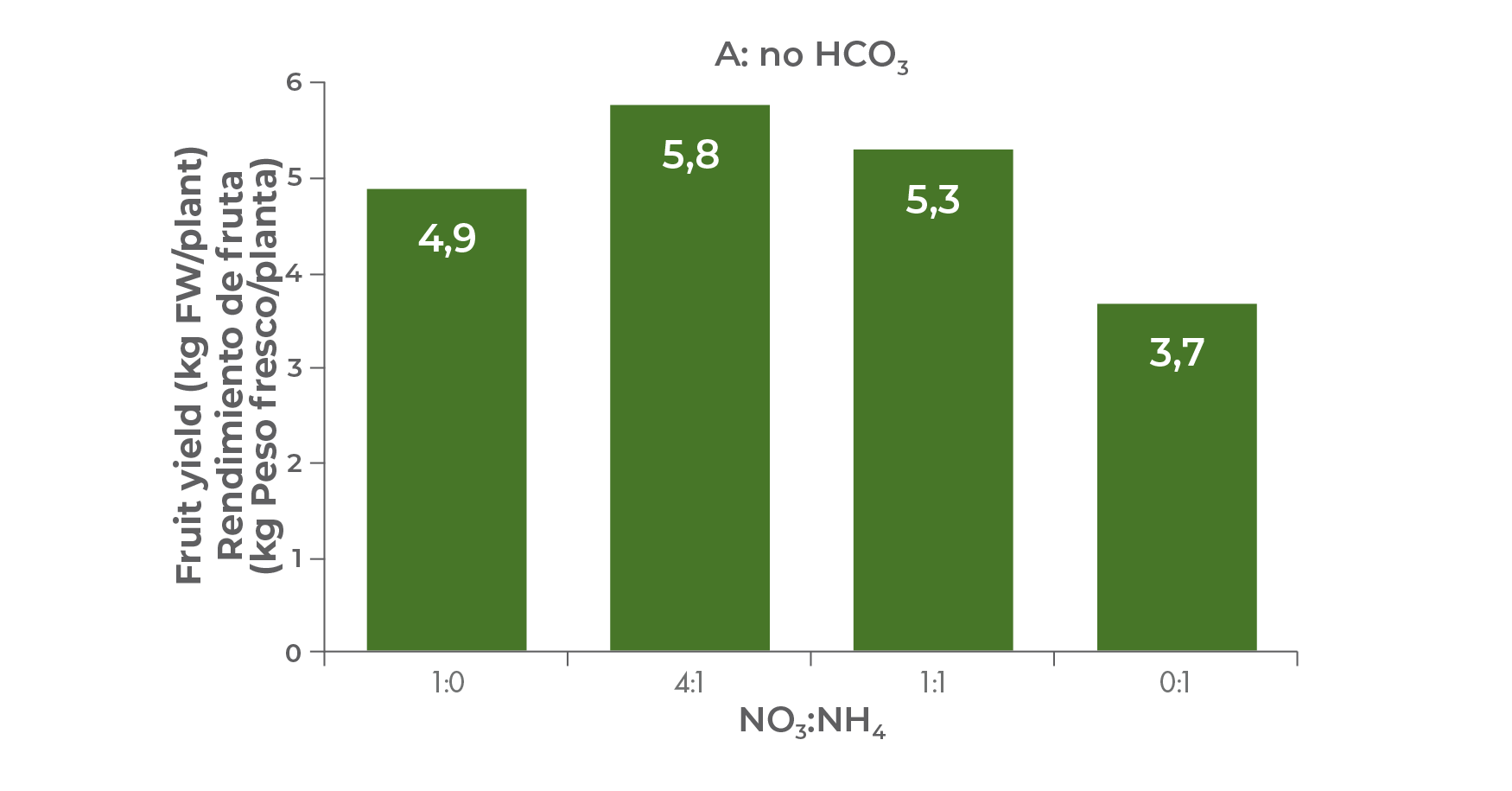 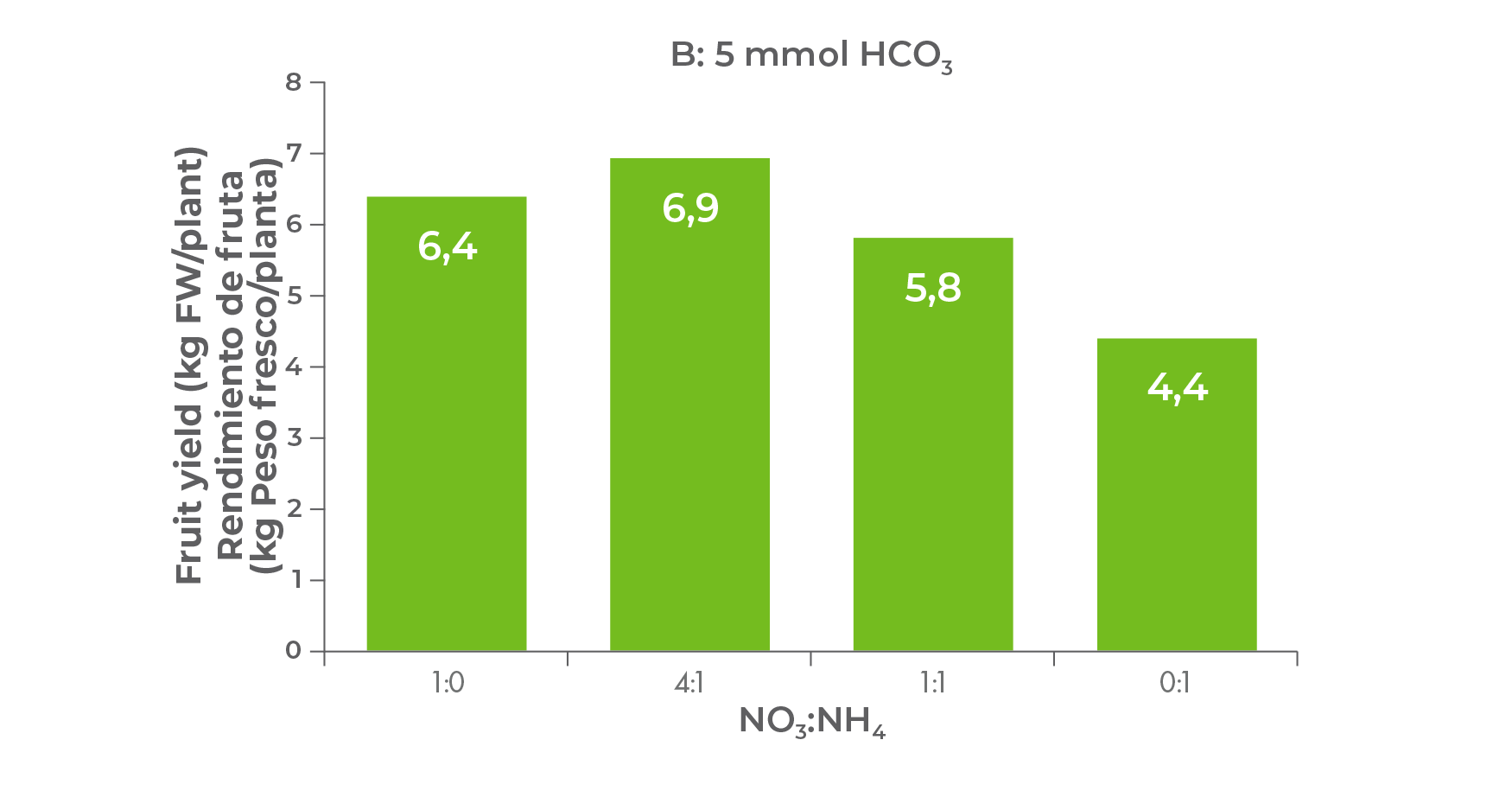 Figure 1. Fruit yield of tomato cultivated on mineral media containing 3 mmol N-source as NO3- , NH4+ or both forms in two ratios, without (A) or with (B) 5 mmol HCO3-. The data are the mean of five replicates of five plants each.