Application of Ultrasol®ine K Plus resulted in better root development and faster plant growth, enabling an earlier harvest in a number of trials in lettuce grown in water-culture (nutrient film technique, NFT).

To demonstrate the effect of improving iodine supply in an iodine-deficient crop, Ultrasol®ine K Plus (potassium nitrate containing a fixed amount of iodine) was applied as source of K and N - and iodine - in the nutrient solution of four cultivars of ‘Crispa’ type head lettuce, ‘Vanda’, ‘Milena’, ‘Brida’ and ‘Bruna’, and coriander in NFT hydroponics, with four different growers. The size of the treated sectors varied between the growers. On average it contained 4-6 NFT tables of 1.5-2 m wide, constructed of galvanized steel tubes. Between the separately fertigated sectors sectors, the crop  cultivar, planting date, plant density and overall crop management were the same. The composition of the nutrient solution was determined by the grower’s standard practice. Two treatments were compared: in the control sector the grower’s standard nutrient solution was prepared using potassium nitrate without iodine as the main K-source, whereas in the other, Ultrasol®ine K Plus was applied in the same amounts and frequency.

In each of the 4 separate production locations, samples of 10-15 heads or plants per sector were taken shortly before harvest, at the same time after transplant in both sectors, and weighed. In one location with two cultivars of lettuce on NFT, additionally the root length was determined in an early stage of the crop cycle (13 days after transplant, DAT) and for coriander the total plant length was measured at 20 DAT.

In all locations a beneficial effect of Ultrasol®ine K Plus application on root growth was observed by the growers, already early in the crop cycle (Figure 1). A consistent improvement of head weight of lettuce and plant weight and length of coriander, was observed in the NFT tables where Ultrasol®ine K Plus was applied compared to the control (Table 1, figures 2 and 3). This could be interpreted as a delay in growth in the control treatment, which lacks a sufficient supply of iodine from the recycling nutrient solution.

Iodine is present in proteins like the enzymes that control of redox-balance in oxygen supply of the roots, important for root development and for proteins managing the flow of electrons during photosynthesis; these processes are the important drivers for plant growth. For both lettuce and coriander, a faster development of the biomass translates into shorter cultivation cycles for the benefit of the grower. The produce can be brought to the market on average 2-4 days faster (figure 4), making it possible to include more crop cycles in a growing season.

Table 1. Average plant weight and root growth of lettuce and weight and *plant length of coriander grown on a nutrient film technique (NFT) hydroponic system. Use of potassium nitrate without iodine in the control sectors (Control) was compared with application of iodine containing potassium nitrate (Ultrasol®ine K Plus). DAT=days after transplant.

Figure 2. Rapid plant growth for earlier harvest in coriander, with Ultrasol®ine K Plus. 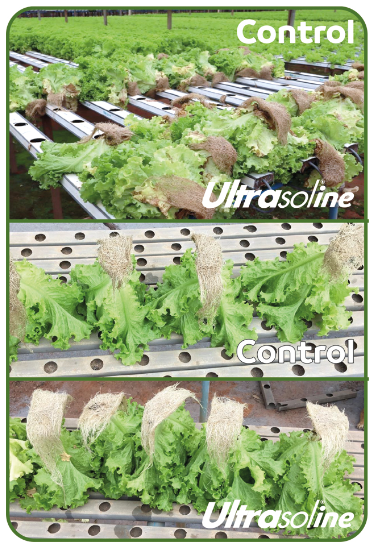 Figure 3. Samples of plants for assessment of plant weight and root growth of Crispa lettuce.

Figure 4. At 23 days after transplant in a summer cultivation, the plants grown with Ultrasol®ine K Plus in the nutrient solution are ready for harvest. The control plants will need 2-4 more days of growth before they fill the market boxes. 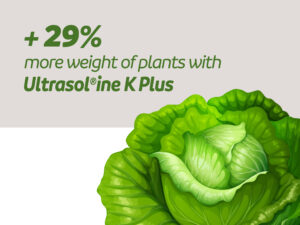 Application of Ultrasol®ine K plus helps to improve growth of green lollo lettuce in hydroponic production in Iquique, Chile 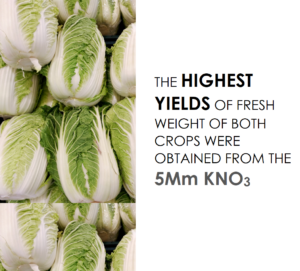