The tuber initiation process depends on both the photoperiod and on certain plant hormones. Under high temperature conditions, gibberellins synthetized in the emerging stems are transported to the stolons. A high concentration of gibberellins in the stolons inhibits the tuberization process. Several researchers (Guivarc’h et al., 2002; Rosin et al., 2003; Sergeeva et al., 2000) have demonstrated that potato tuberization is accelerated when the relation cytokinins/ auxins is in favor of the cytokinins. In this way, a concentration increment of cytokinins favors the tuberization, especially in early species (García-Flores et al, 2009). 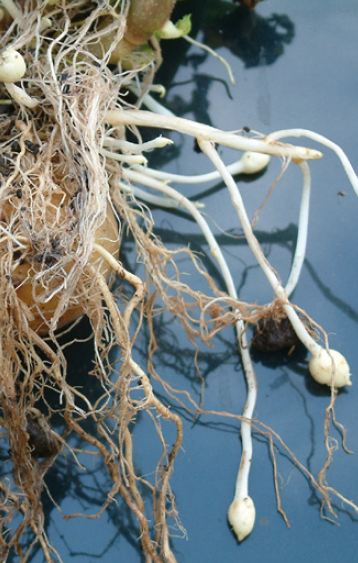 Applying phosphorus to the soil is fundamental for adequate formation of the root system and, in turn, achieving a greater number of tubers. Also, the application of nitrate nitrogen enhances cytokinin synthesis, while boron and zinc enhance intensive cell division. Additionally, an adequate N:K balance must exist, since excess nitrogen diminishes tuberization and elongates the process, resulting in a non-uniform tuber size.