After emergence, a rapid phase of vegetative growth begins and continues until flowering before diminishing considerably, although it does not stop completely. At this point, strong foliage and good root development are needed in order to start tuber growth. According to Harris (1992), there is a direct relationship between the growth rates of the roots and shoots. This means that varieties with large aerial growth have comparable root growth, and vice versa.

The production of dry matter is fundamental to obtaining high yields, and for this the LAI (leaf area index) must reach 3 m2 of leaf area/m2 of crop surface as early as possible. This LAI should be maintained actively for as long as possible. An early foliar cover is more important than a late senescence under scarce light conditions. Under conditions free of water stress, light interception is responsible for 92 percent of the yield variation. 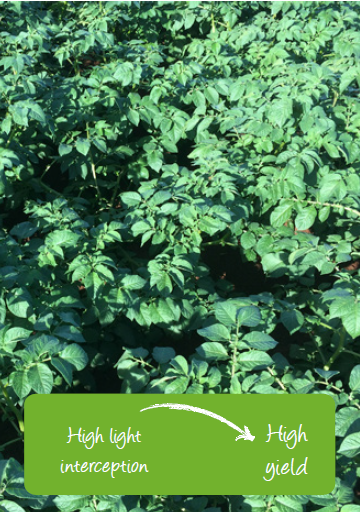 Cytokinins stimulate growth of axillar and lateral buds (rupture of the apical dominance) and impede the onset of foliar senescence. Many researchers have demonstrated the influence of nitrate on cytokinin synthesis and accumulation, but these processes do not occur with ammonium sources (Hirose et al., 2008; Argueso et al., 2009; Peng et al., 2008). Nitrate nitrogen generates a rapid lateral vegetative growth since it encourages cytokinin synthesis, which allows an accelerated closure of the crop canopy (Römheld et al, 2005). 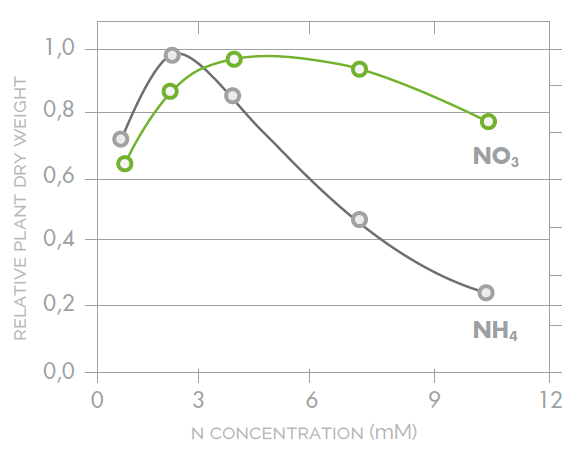