Initial experiments were performed on four tomato hybrid cultivars: two large- and two small-fruit hybrids. Significant differences in yield depression under saline conditions were observed. The effect of nitrogen source on alleviation of salinity was studied in detail on the large-fruit cultivar most sensitive to an increase of salt in the nutrient solution: cv. “R144”.

The highest fruit yields were recorded for the treatment with ratio of 7 mM NO3- to 1mM NH4+, (5980 g fruit/plant without NaCl, and 3320 g fruit/plant under saline conditions). Decreasing the nitrate concentration to 6 or 4 mM in the nutrient solution resulted in lower marketable yields in both control and salinity treatments (Table 1).

In the control group (no NaCl added) the treatment with 1:1 NO3-:NH4+ ratio in the nutrient solution reduced the yield by 26% compared to the optimal yield achieved with the 7:1 NO3-:NH4+ ratio.

Yield reductions under saline conditions were attributed to the decline in fruit weight. Water uptake by tomato plants theoretically declines with the increase in salt concentrations in the nutrient solution. This could cause a decrease in fruit weight. However, it is unlikely that the addition of 1 mM NH4+ to 7 mM NO3-, increased water transport to the fruit, since the total soluble sugar content of tomatoes was not affected by N form. The harvesting time in this experiment was delayed with one week when ammonium was applied. This extended fruit development period is probably a reason for the increased fruit size. In the control without NaCl, decreased fruit weights were observed only in the treatment with 1:1 NO3-:NH4+ ratio.

Increasing NH4+ concentration in the solution resulted in increased BER (Blossom End Rot) incidence in both control and salt treatments (Table 1). The highest ammonium concentration (4mM) resulted in the lowest LAI and leaf dry matter content at both NaCl levels (0 and 45 mM) as compared with 1 or 2 mM NH4+. The incidence of BER increased with increasing NH4+ levels, and addition of NaCl further worsened the incidence of BER.

The fruit quality in terms of percentage total soluble sugars, titratable acidity and fruit serum electrical conductivity increased markedly with increased salinity. The N source did not affect these parameters. The authors conclude that the use of mainly NO3- with the addition of up to 1 mM NH4+ can counteract adverse effects of salinity, as it improved fruit size with minimal loss of fruit quality.

Table 1. The effect of N-source and salinity on tomato fruit yield and fruit quality (Indeterminate hybrid cultivar “R144”). Within each column, means followed by the same letter do not significantly differ at 5% level (general least square models in JMP). 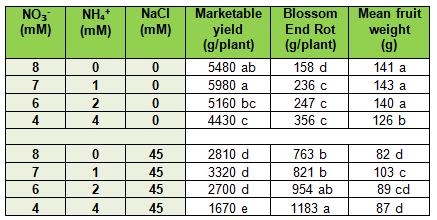 Get to know potassium nitrate in tomato nutrient management