To demonstrate the effect of improving iodine supply in an iodine-deficient crop, Ultrasol®ine K Plus (potassium nitrate containing a fixed amount of iodine), was applied as source of K and N - and iodine - in the nutrient solution of an Italian type sweet pepper ‘Kapiamo’ in sandy soil in a commercial production location in Agadir, Morocco. The effect of this application was compared to the normal iodine-deficient nutrient solution, on two plots of 1 ha each in adjacent greenhouses. Prior to the trial, samples of the irrigation water were taken and the concentration of iodine in these samples was measured. The concentration of iodine in the irrigation water was below 0.1 μmol I L-1, which was considered to be deficient.

Both greenhouses were planted with the same cultivar, on the same planting date, and fertigated with the same nutrient programme. The only difference between the greenhouses was the use of the regular source of potassium nitrate in one greenhouse, and Ultrasol®ine K Plus in the other. Ultrasol®ine K Plus was applied starting in November, 2 months after transplant in the end of August, and continued to the end of harvest in May. Table 1 shows the composition of the concentrated solution, injected 2x per week in the irrigation system. A total of 420 kg KNO3/ha was applied in each greenhouse between November and May. The total season yield was recorded for both greenhouses seperately.

The grower observed clear differences in crop development between the sectors. The first noticeable difference was in root growth. In the control greenhouse, the root growth was as expected from the farmers experience. In the greenhouse where Ultrasol®ine K Plus was applied, a distinct improvement of fresh root growth was observed in the whole greenhouse (Figure 1). At the end of the season, the total fruit yield was 10% higher from the greenhouse where Ultrasol®ine K Plus was applied, and notably the yield of export-quality fruits was 14% higher from that greenhouse, compared to the greenhouse with a low supply of iodine (Table 2). The higher yield of export-quality was related to a lower incidence of fruit quality disorders such as blossom end rot (BER, Figure 1). Clearly, here the application of iodine prevented loss of yield due a lower quality of fruits as result of iodine deficiency.

Blossom end rot is a fruit quality disorder which is linked to a local deficiency of calcium in the distal part of the fruit. The cause of this calcium-deficiency is a complex interaction of the capacity of the root system to absorb calcium from the root solution, the speed of expansion of the developing fruit, and the capacity of the vascular system to transport calcium to the blossom-end of the fruits, to meet the demand for calcium in that tissue. Iodine improves root growth, and acts synergistically with potassium nitrate to improve uptake of calcium from the root zone and translocation of calcium to fruits. Additionally the effect of iodine to improve photosynthesis and prevent stress in leaves and roots may explain the observations of the grower on the improved root system and the lower incidence of BER in the crop supplied with sufficient iodine in the root zone with Ultrasol®ine K Plus.

Table 1. Fertiliser sources, injected 2x per week in the irrigation system, from 200 L of a concentrated stock solution. 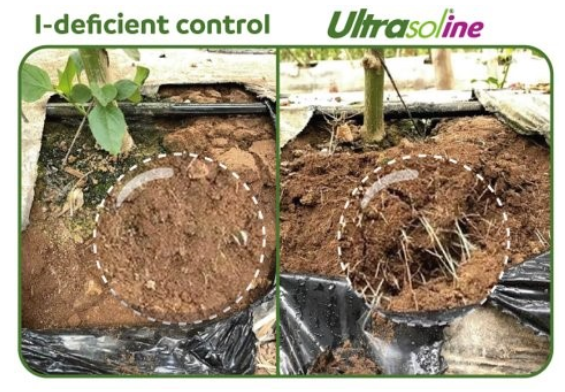 Figure 1. Improved root growth and an lower incidence of blossom end rot of the pepper fruits in the greenhouse where Ultrasol®ine K Plus was applied.