Establishing the phenological cycle of avocado in Tancitaro, Michoacan – Mexico

Today’s agriculture is increasingly competitive, where maximum quality and production are essential to obtain expected results. Therefore, it is necessary to make use of every conceivable tool in order to leave as little as possible to chance.

So, the adequate use of irrigation, fertilizers and pesticides allows us, on one hand, to optimize the results of the crop, and, on the other hand, to make a rational use of all our resources.

To achieve this goal, it is vital that we know how our plants perform, to know when their roots, shoots, and fruit, etc. grow. This knowledge allows us to enhance this growth and, in addition, maximize results.

In this context, we would like to present a study carried out in the 2000-2001 season, in Tancítaro, Michoacán State, at the “Las Iglesias” orchard (1,950 masl), owned by Mr. José Orejel, in which the phenological cycle of the avocado was established. In this trial, the periods and scope of the plants’ growth (fruits, foliage, roots and flowers) were determined, for plants under rain-fed conditions and under relief irrigation.

A total of twelve plants were used for this trial, five under relief irrigation, five under rain-fed conditions, in both cases to measure the growth of flowers, fruits, foliage and fruit dropping, plus two additional plants, one under irrigation and one rain-fed, were used to measure root growth.

Measurements were carried out on a weekly basis, from March 2000 to March 2001. To measure the growth of shoots, branches pointing into the four cardinal points were selected on all trees. For flowering, following stages were selected: start, full flowering and end of flowering. For fruit growth, one fruit per branch was selected, on all branches, and its equatorial and polar diameter was measured. For fruit dropping, all the fruits that set per branch were counted, and re-counted on a weekly basis, and the difference in number represented the dropping. To evaluate the growth of the root system, rhizotrons were installed in both trees (one under irrigation, the other rain-fed), and the weekly growth of the observed roots was measured.

The results obtained were as follows:

The avocado plants showed two marked root growth flushes, the most important one in summer after the vegetative growth, and the second one at the start of winter. This coincides with the reports of Dr. Whiley in Australia and Gardiazabal in Chile, who indicate that avocado shows two root growth peaks and that they are subsequent to the shoot growth. It should be mentioned that in the case of Michoacán, although these two peaks are present, in the plants with relief irrigation growth starts in March, while in the rain-fed plants it starts at the end of May. A certain competition of root development with fruit and foliage development can be noted, similarly to what is reported by Whiley and Gardiazabal. 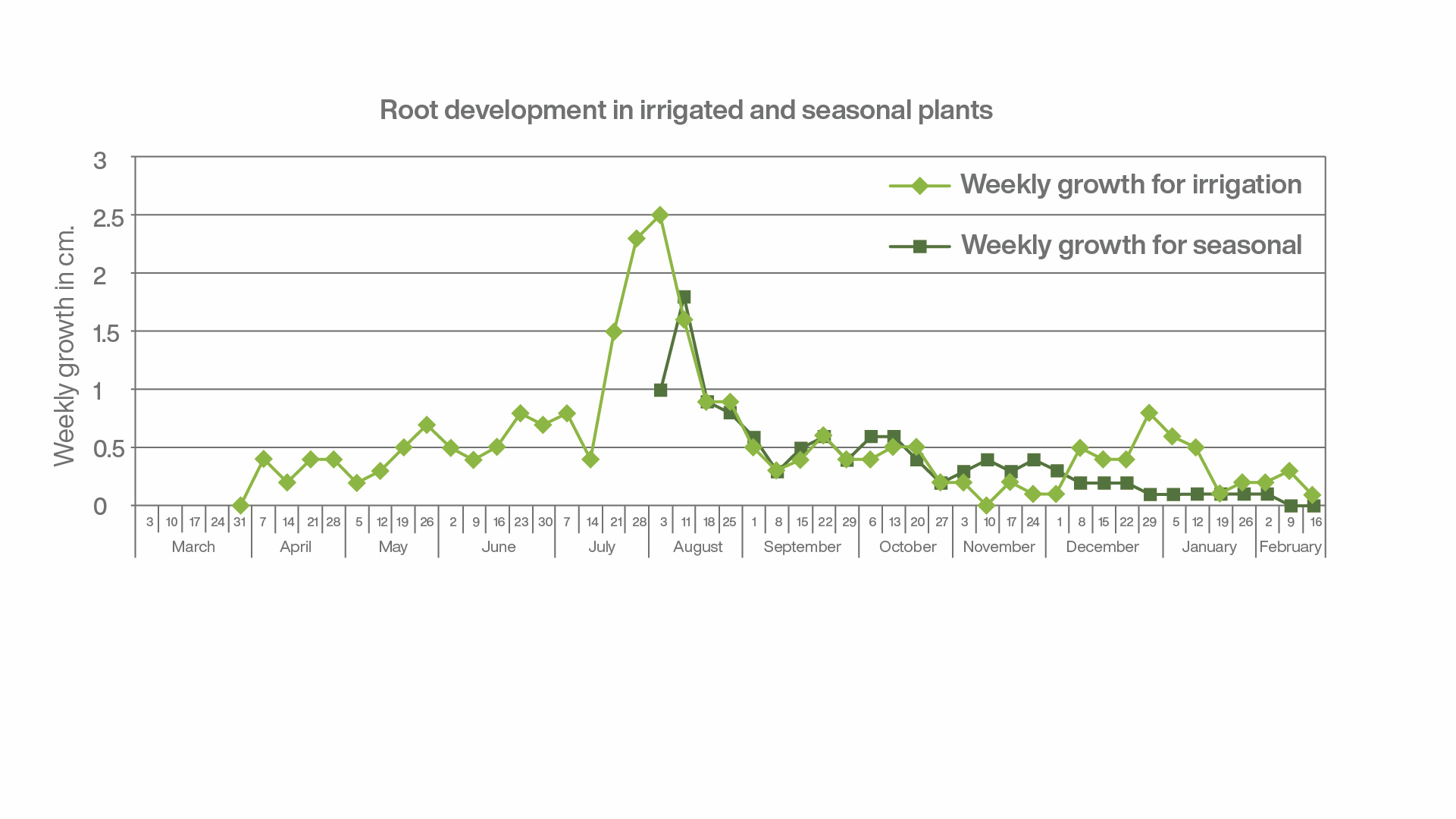 We believe that the difference in development is due to irrigation, which benefits root growth as long as all other necessary conditions are present, such as temperature, photosynthates and some hormone signals delivered by the rest of the plant. This is thought to have very favorable consequences for fruit growth.

According to the reports of the mentioned authors, avocado shows two to three growth peaks, depending on the altitude in which it grows. Three growth peaks take place in Michoacán.

Shoot growth is highly competitive with fruit growth for the plant’s carbohydrates, therefore, it is not advisable to encourage its growth when the fruit is developing (do not use high levels of Nitrogen at this point).

This vegetative growth is as significant for the growing fruit as well as for future harvests, and therefore, an adequate shoot development ensures a good harvest today and also good harvests in the future. To achieve this, a good nutritional and irrigation management is essential.

It is recommended to control the excessive development of the tree, because if it generates unwanted growth, the harvest and applications will become expensive, and it will also damage the fruit’s development. A balanced and complete nutrition is necessary to control this. 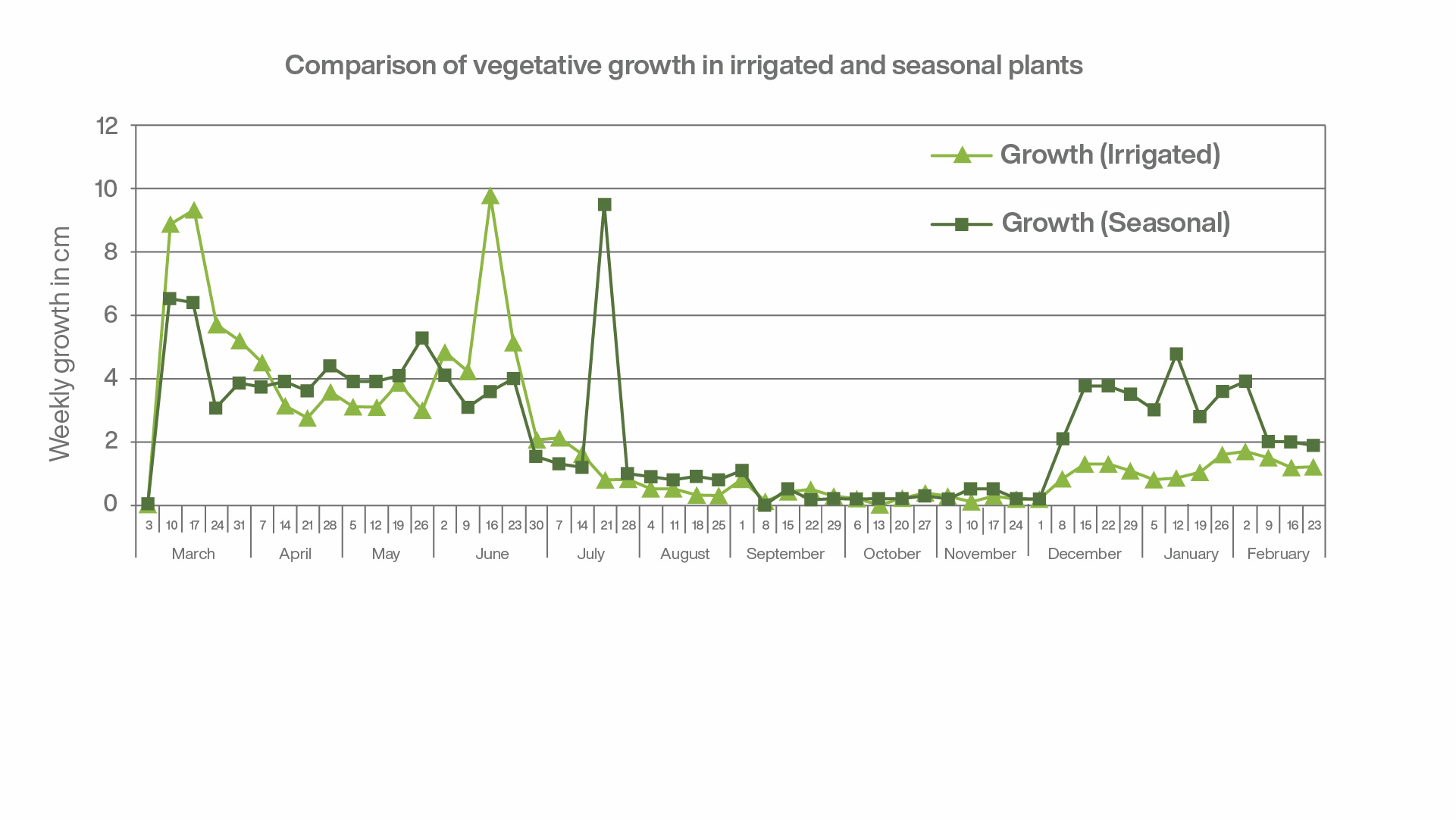 Differences in the growth scale and the timing due to the presence or absence of relief irrigation can also be noted.

If we consider that growth in summer is the most competitive with fruit growth, even to the point of causing fruit abortion and dropping, it is important to bring it forward in order for the fruit to have a longer growth period with no competition, programming nutrition and boosting the growth and quality of the harvest.

In Tancítaro, avocados showed three flowering periods, the normal one (December-January), one in March – marceña, and an outstanding one in November. This event corresponds to 9% of the plant’s total dry matter, and therefore, to improve fruit setting percentages substantially improves the loss of energy and nutrient reserves generated by this phenomenon. 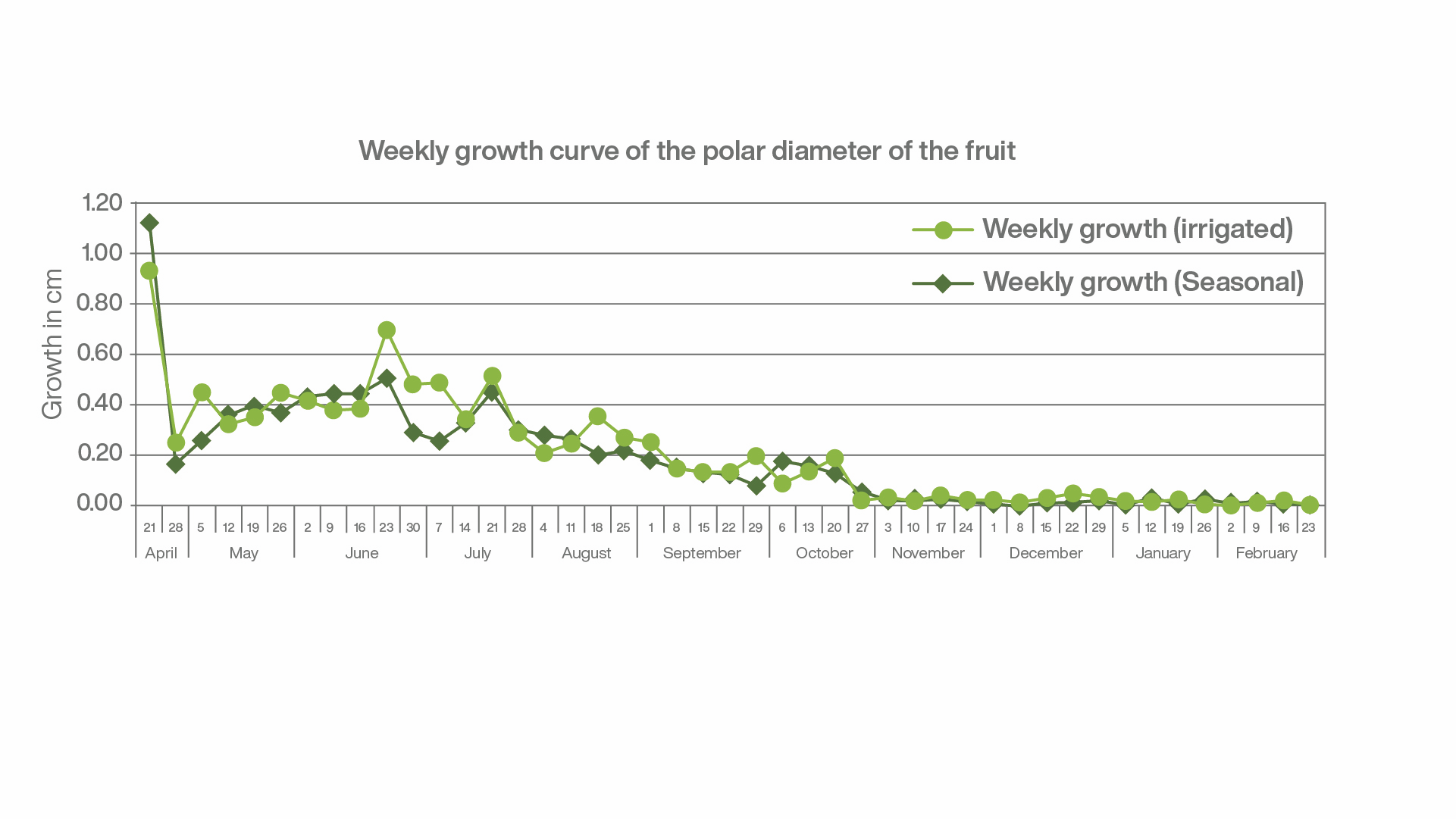 Two flowering periods are reported in other productive areas worldwide, which gives Michoacán an important advantage with production during all months of the year.

According to Gardiazabal, the different growths in avocados are all interdependent and interrelated, which means that they rely on each other. Thus, we can see that after each vegetative growth peak there comes a root growth, with varying intensity. The same occurs with the fruit growth, which is more intense when the shoot growth has diminished. Fruit dropping occurs, according to the mentioned authors, because of the competition with shoot growth. However, in Michoacán dropping is more intense when the fruit growth

rate is also more intense (competition of fruit with fruit).This is understood to be due to the lack of water during this growth stage, and the lack of root development, resulting in the plant having no chance of feeding. 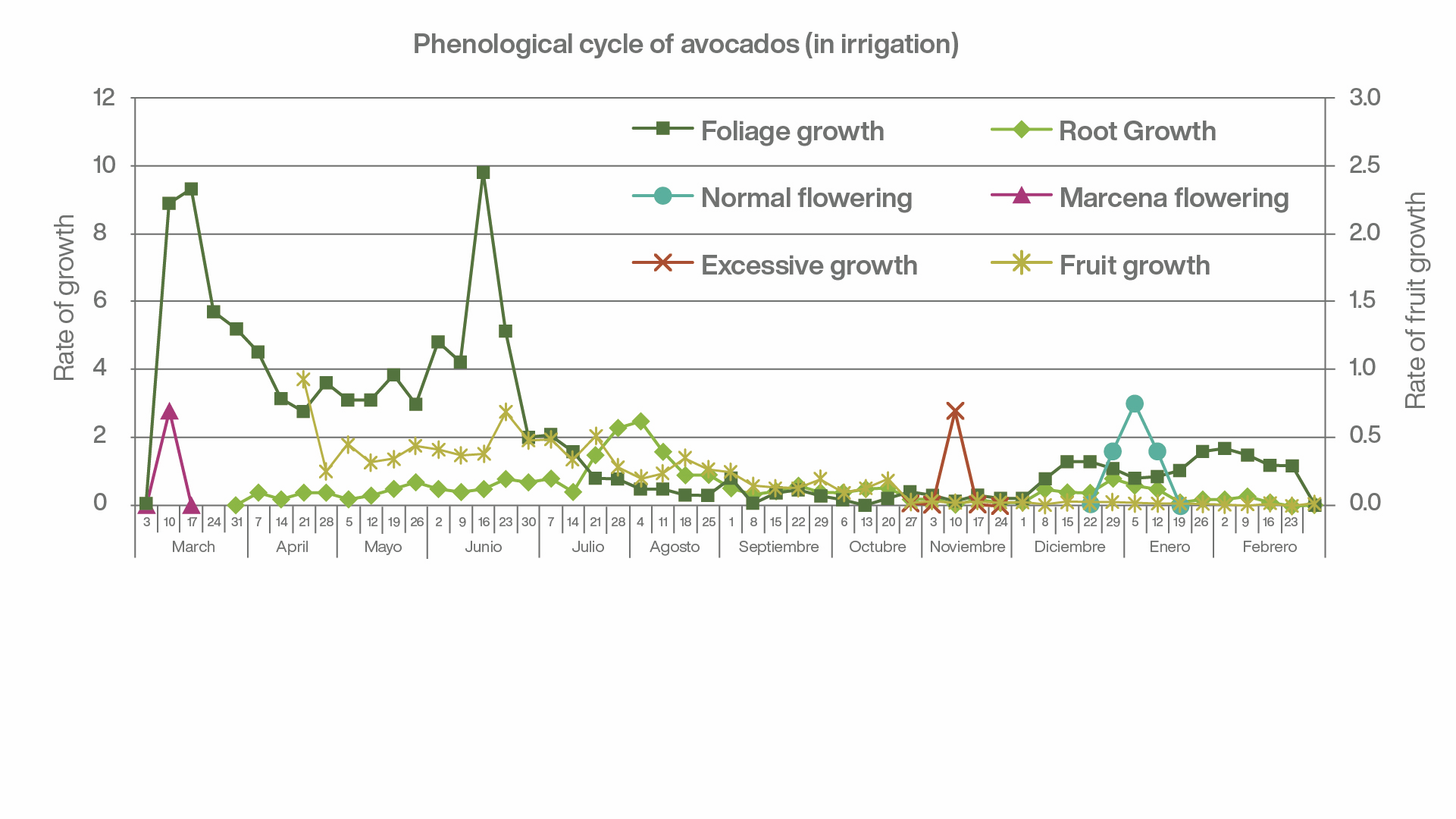 The objective of this study is to get to know the crops performance more thoroughly, and to be able to intervene agronomically, thereby enhancing the productive levels of the plants. In this context, and considering the results of this study, we are presenting below a nutritional proposal that considers all aspects which we have encountered. 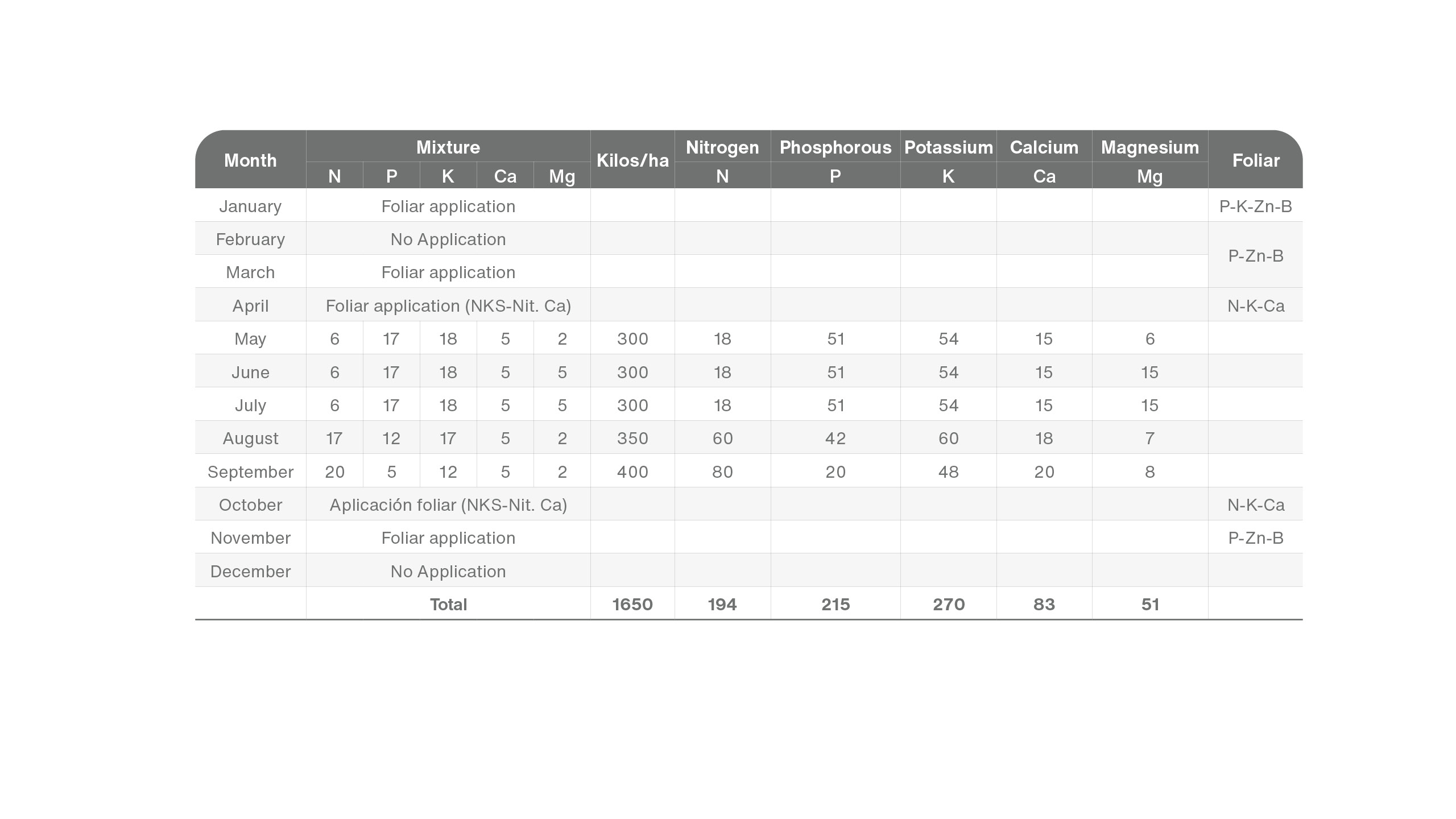 In this plan we consider the crop’s requirements. Applications start in May, because at this time we already have root growth. They are divided into several applications and continue until September (end of the rainy season). In terms of Nitrogen, around 15% to 20% must be applied between April and June in order to avoid competition between foliage and fruit growth (reducing fruit dropping). The rest (80% to 85%), is to be applied between July and September.

Regarding Phosphorous, apply 55% to 60% between May and June, and the remaining 40% to 45% between July and September.

The remaining months supplementary foliar applications are suggested, which will boost fruit growth (Potassium) and quality (Calcium), induction and differentiation (Potassium) for future seasons, quality of flowering (Boron, Zinc and Potassium), foliage growth (Nitrogen and Magnesium) when the competition with fruit growth is at a minimum, etc. 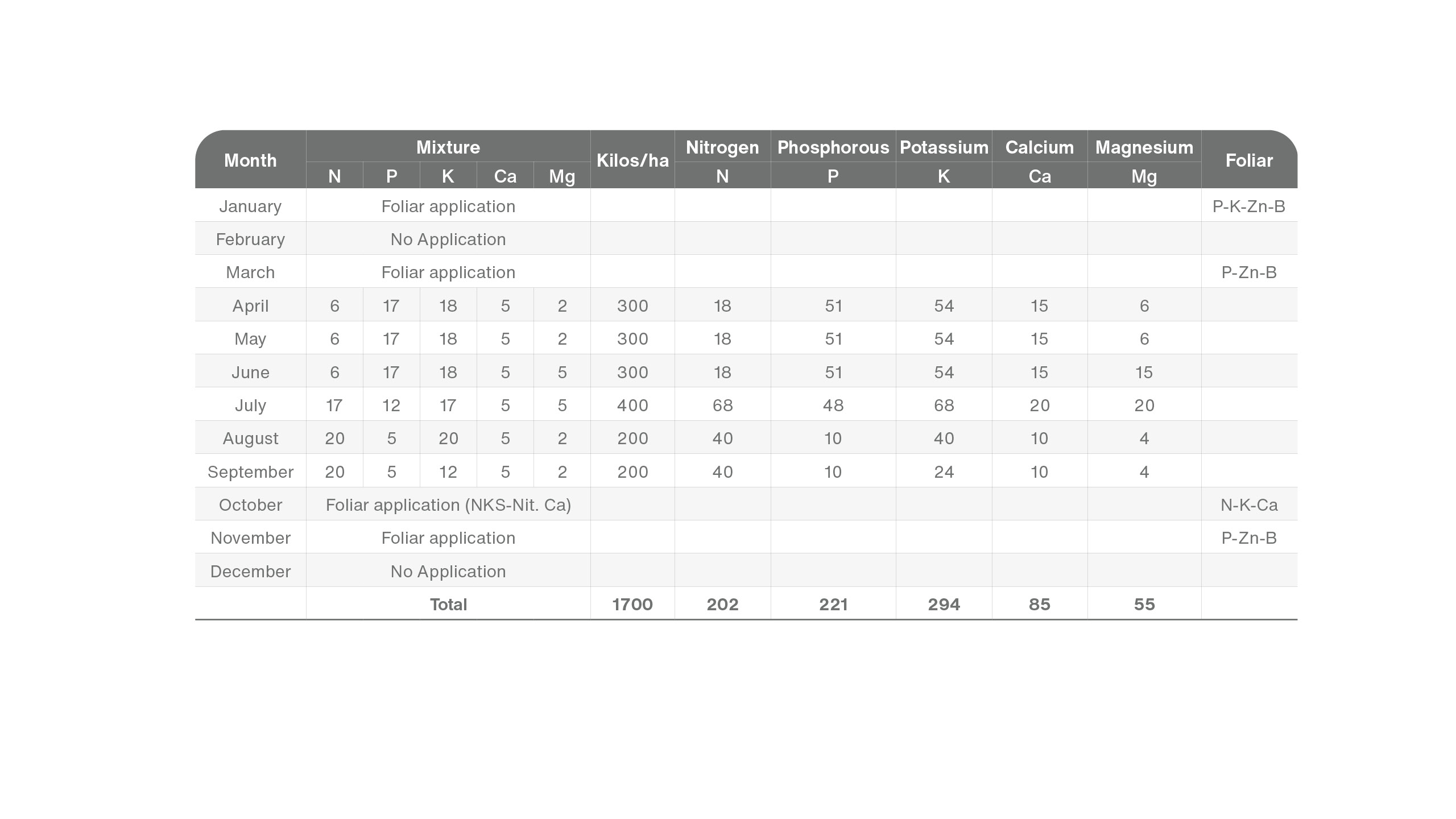 The same considerations were made for plants under irrigation. In this case the applications are brought forward because there is root growth starting at the end of March and, therefore, the plant can absorb nutrients. This nutrition is extremely important because the recently set fruit is developing strongly.

The relationship between the degree of mobility and boron deficiency