An experiment was conducted to study the effect of 2 levels of gibberellic acid (100 and 200 ppm) and 2 levels of potassium nitrate (1 and 1,5%) alone and in combination on the growth and yield of tuberose (Polianthes tuberosaL.) during the wet season in 2010 and 2011. The experiment was carried out at the Farm of Horticulture section, College of Agriculture in Nagpur, India. Farm yard manure was applied at 20 MT/ha and in total 200 kg N, 300 kg P and 200 kg K was applied per hectare. The foliar sprays were applied 30 days and 60 days after planting, the control was sprayed with water only.

The number of leaves per plant and total leaf area were the highest for the foliar application of 200 ppm GA3 in combination with 1,5% KNO3. Both GA3 and KNO3 had a significant effect on shortening the time to spike emergence as compared to the control. The combined sprays also increased the number of florets per spike. The higher concentration of GA3 in combination with KNO3 applied as foliar spray resulted in increased spike yields (Figure 1). 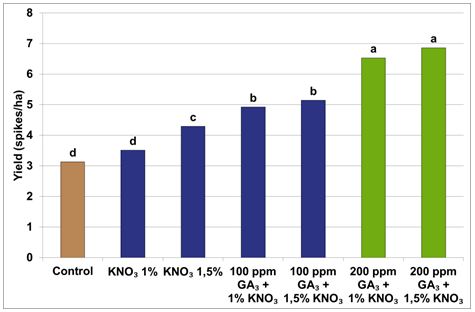 Figure 1. The effect of foliar applied KNO3 and GA3 on spike yield in tuberose.