Yield of rice was increased 12%, by the benefits delivered with potassium nitrate as main K source from Qrop® mix within a nutritional program, compared to a traditional program delivering the similar NPK amounts, but using on potassium chloride as main K source. This increase in yield more than compensated for the additional costs for the SQM treatment and increased profit for the producer with 238 USD/ha over the current management. 80% of the K2O supplied in the traditional programme with potassium chloride (MOP) was replaced by potassium nitrate from the Qrop® mix. Also the amounts of other products within the traditional programme, like Urea and a relatively expensive source of Mg, Zn and Ca and S could be greatly reduced by application of Qrop® mix.

The average rice yield in Ecuador is quite low (approximately 4,5 MT/ha), and rice producers in Ecuador face several problems which affect productivity of their crop. Poor nutritional management is one of these. At present, the consumption of rice in the country is higher than its production. This is an incentive to support agronomic development to increase yields and be more competitive. Currently, rice producers base their fertilization mainly on nitrogen (100-140 kg N/ha) and use only very few units of potassium (30 kg K2O/ha). The main source of K is potassium chloride (MOP) because of its low cost.

For development of the use of Qrop® mix in rice in Ecuador, results of trials with farmers aimed to show:
1. The benefits of use of potassium nitrate as main K source, as opposed to potassium chloride,
2. The resulting yield-increase compensates the higher cost of Qrop® mix.

The canton Daule is located in Ecuador, in the coastal region of the province of Guayas. This province is source of more than half of Ecuador’s total rice production. Daule is one of the main areas where rice is produced during the dry season, rice being the main commercial crop in the region. It is grown in paddy fields and sold by the producers to various rice-millers in the area.

Image 1. Harvest time of paddy rice field in the province of Guayas, canton Daule of Ecuador.

Image 2. Harvest time of paddy rice field in the province of Guayas, canton Duale of Ecuador.

The SQM agronomist team in Ecuador selected a group of progressive producers to cooperate in the development of the use of crop-stage specific Qrop® mix formulas. One of these was Ing. Jorge Estrada. Investigations with these producers led to the conclusion that not the amount of potassium supplied to the crop but the source of potassium applied was the limiting factor, resulting in low yields. The SQM team proposed to replace the major part (80%) of K2O supplied with potassium chloride (MOP) by potassium nitrate from Qrop® mix, and slightly increasing the total K dose from 105 to 115 kg K2O. The total application N and P remained the same - with Qrop® mix replacing 66% of N traditionally applied with urea and ammonium sulphate - and reducing the amount of an expensive source of MgO (4%), Zn (1,6%), CaO (22%) and S (8%) by 50% (Table 1). Both fertilizer programmes were compared on a large field of 24,6 ha. The control treatment with the client's current programme covered 22,4 ha and the SQM programme covered 2,6 ha. The SQM programme included two stage-specific Qrop® mix formula’s: Qrop® mix Desarrollo (28-0-12) and Qrop® mix Producción (17-0-35).

Table 1. Fertilisers applied in the SQM programme including Qrop® mix and the current farmers practice. 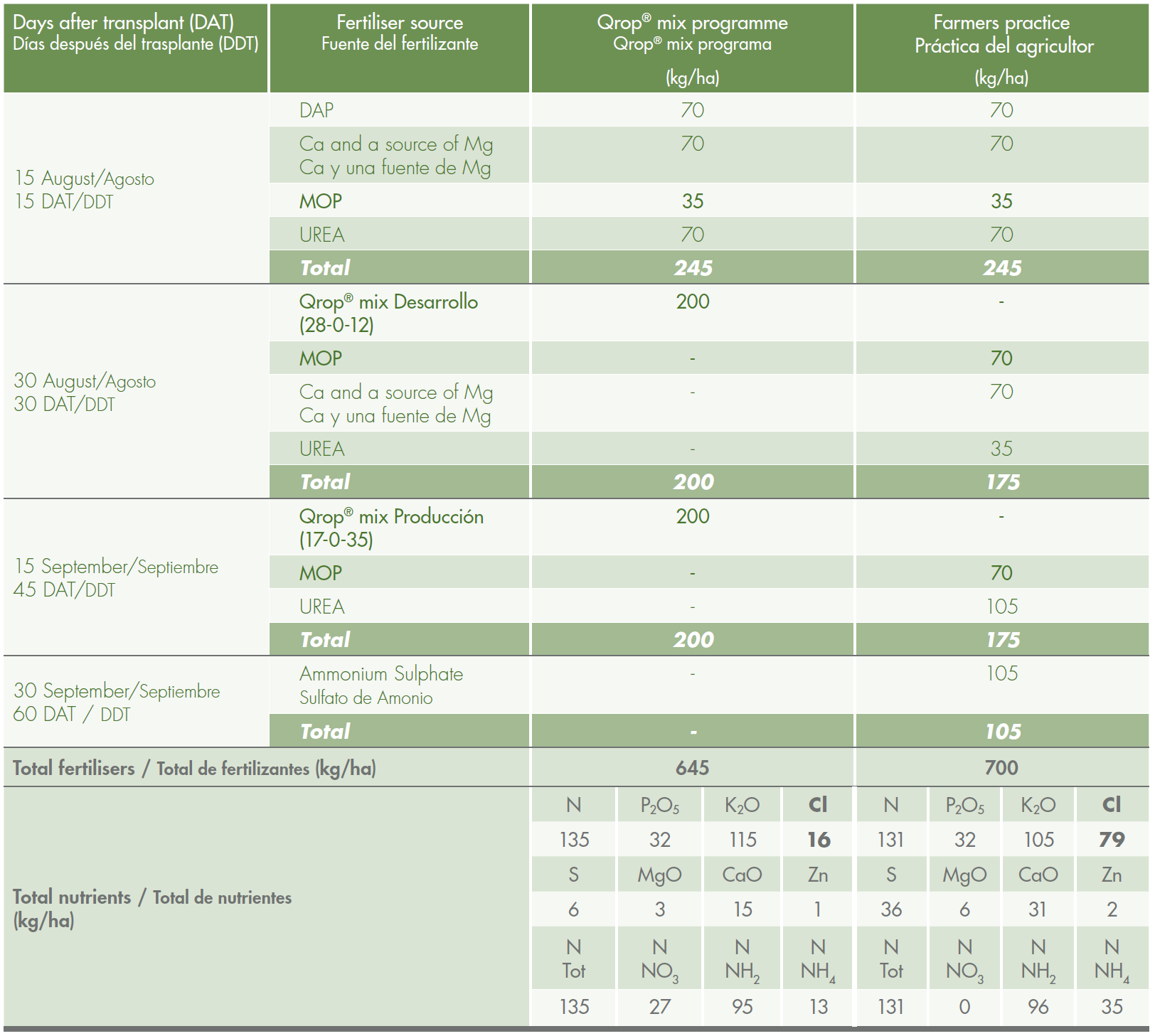 To establish the profitability of the application with Qrop® mix in the trial, an economic analysis was carried out (Table 2). The trial showed an increase of yield in favor of the SQM programme: Compared to the client’s current practice, 12% more paddy rice compared was harvested. This translated into an additional gross profit of USD 238/ha. This clearly showed that Qrop® mix increased the net income of the producer over the current management, and more than compensated for the additional costs incurred in the SQM treatment.

Image 3. Crop stand at the time of the first application of Qrop® mix, 30 days after transplant.